Ok, I’ll admit it. I love okra. And while I realize that this veggie can be a little polarizing for folks, I just love it. Whether it’s fried like a hash, or more like individual pieces of fried deliciousness, it’s just so tasty to me. I like it in things like Okra and Tomatoes or my Okra and Green Tomato Fritters. Heck, I’ll even eat it boiled. I especially love a few pods thrown into a big pot of peas or beans. And don’t get me started on the deep fried pickled okra in my cookbook. Seriously. But can you believe that until a few weeks ago I’d never had it roasted?

Now, I’m a big proponent of roasting vegetables. I think it brings out some great flavor. The caramelized bits that are the result of high heat roasting are my favorite. I’ve just never thought to roast okra.

Ok, it’s not that I never thought about it. It’s just that when we have okra, I typically fry it using one of my old stand-by methods. But I had some extra and decided to give it a try. Whoa, was I surprised!

Now, I think most folks’ aversion to okra relates to the sticky (or sometimes called slimy) stuff that can result when it’s cooked. That stuff is called mucilage and it’s the same stuff that makes okra the perfect addition to things like gumbos and stews because that mucilage helps to thicken them. In fact, okra is a member of the mallow family and the sticky stuff is also a cousin to the mucilage that was originally an ingredient in marshmallows.

Now some folks say a vinegar or buttermilk soak before cooking will help rid you of that slimy texture. Others say there’s no way to avoid it completely.

#1 – Choose young okra. Over the years, I’ve found that younger okra seems to produce less of the mucilage when it’s heated. I always use my ring finger as the guide and try to buy okra at the farmers market when it’s in a loose bin and I can pick pods myself. I just grab pieces that aren’t any longer than my finger. This also helps to ensure it will be tender. As okra gets bigger, it can become woody and fibrous, so choose the smaller pods.

#2 – Use high heat when cooking. Roasting is the perfect way to cook okra for zero slime because of the high heat. I’m not 100% sure of the exact process, but the high heat certainly produces less slime. And the high heat caramelizes the veggie which adds great flavor, too.

While the prep for this recipe is super easy, I do recommend taking a little time to choose okra pods that are similarly sized. This will mean they’ll cook more evenly. At the super high temp of 450°F, the heat can burn smaller pods in 20 minutes while not getting bigger pods to that crispy texture you want. Having pods that are all similarly sized will mean they should all cook evenly in the same amount of time.

Also try to pick pods that are bright green and firm without tons of black or dark colored spots – those are the result of bruising.

The other thing worth mentioning here is the cook time. Between 15 to 25 minutes is a pretty big span of time at such a high heat and I usually like to be a bit more precise in my instructions, but there’s a solid reason for the variance. It’s all about size. Smaller okra will cook faster while bigger okra will take a bit longer. I can’t be there with you to choose the exact size, so I gave you a little room to wiggle. After about 15 minutes, just start checking the okra every 3 to 4 minutes (without fully opening the oven and letting all the heat out) to ensure they’re golden brown (maybe even a little darker than golden) and getting crispy. I think you’ll find too that they’ll crisp up even a little more once they’re out of the heat.

Now you can choose to serve these without the dressing and they’re super delicious all by themselves, but I really like that tangy lemon dressing with the okra. And it’s super easy to make, too.

You can even swap the flavors up a bit and replace the salt and pepper with about 1 1/2 teaspoons of a good Creole seasoning for even more flavor. I tested it with Tony Chachere’s and loved that flavor just as much as the plain version with just salt and pepper. Y’all enjoy! 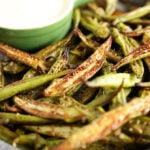 Print Pin Save
5 from 6 votes

Choose okra that is all of similar size so that it cooks in the same amount of time. I typically choose okra that’s no longer than my ring finger to ensure it is tender.

Did you make my Crispy Roasted Okra with Creamy Lemon Dressing?I’d love to see! Share on Instagram, tag @southernbite, and use the hashtag #southernbite!
Tag on Insta Leave a Rating