This rich, creamy cheesecake is made even better with a thick layer of sweet and salty graham cracker crust on the top and bottom. Plus, there’s no water bath with this recipe!

I love a good cheesecake. Both my Easiest Oreo Cheesecake and Easy Caramel Pecan Cheesecakes are always big hits. But regardless of just how delicious your cheesecake filling is, it’s just not a cheesecake without the perfect crust.

And if I’m being totally honest, that crust is usually my favorite part. I’m the one who slices the cheesecake and steals a piece of crust or two off the other pieces just so I can have more crust. You know you’re guilty, too… 😂

So when I saw a recipe for a cheesecake with crust on both the top and bottom a few weeks back on Facebook, I knew it had to be in my future.

So, when I took my classic cheesecake filling and sandwiched it between a nearly triple portion of my graham cracker crust recipe, something magical was born.

And, y’all… I’m kinda obsessed with this.

Now, I hate dealing with a water bath, so in typical “Stacey” fashion, I made this recipe without one – just like my other cheesecakes.

Water baths slow the cooking process down to keep the top level and prevent it from cracking. (It also helps with the texture a little bit.) But since we’re topping this cheesecake with a crust, we don’t have to worry too much about looks.

If you’re feeling like an overachiever, you can absolutely use a water bath for this recipe, you’ll just need to adjust the cooking time.

How do I tell if my cheesecake is done?

Most folks test cheesecake doneness by giving it a little shake or tap. The top should be mostly set with a little jiggle right in the center.

I prefer to use an instant read digital thermometer and take the cheesecake’s temp right in the center. You’ll want the cheesecake to be right at 145°F.

The problem with this, of course, is that it leaves a hole in your cheesecake. But if you have a topping going on the cheesecake, you can fill that small hole in with the topping. In the case of this recipe, you can simply scoot a little bit of that top crust over to fill the hole. 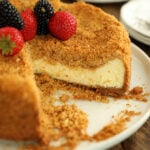 Did you make my Easy Double Crust Cheesecake?I’d love to see! Share on Instagram, tag @southernbite, and use the hashtag #southernbite!
Tag on Insta Leave a Rating