This Vintage Lemon Apricot Nectar Cake is an old school recipe that starts with a cake mix but turns into a super moist, crazy flavorful dessert! 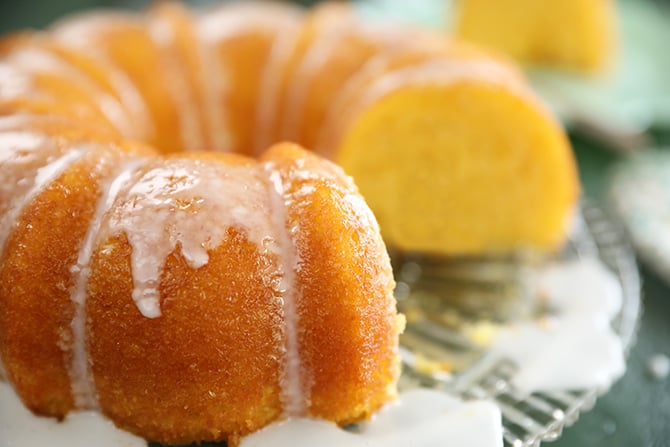 After I posted my Pineapple Juice Cake a few years back, I had tons of comments, messages, and emails from folks saying that it reminded them of an apricot nectar cake their mother/grandmother used to make. I mentioned it to my own mother who said she, in fact, remembered my grandmother making one. So, I set out to find this apricot nectar deliciousness in my collection of old cookbooks. And I found it! 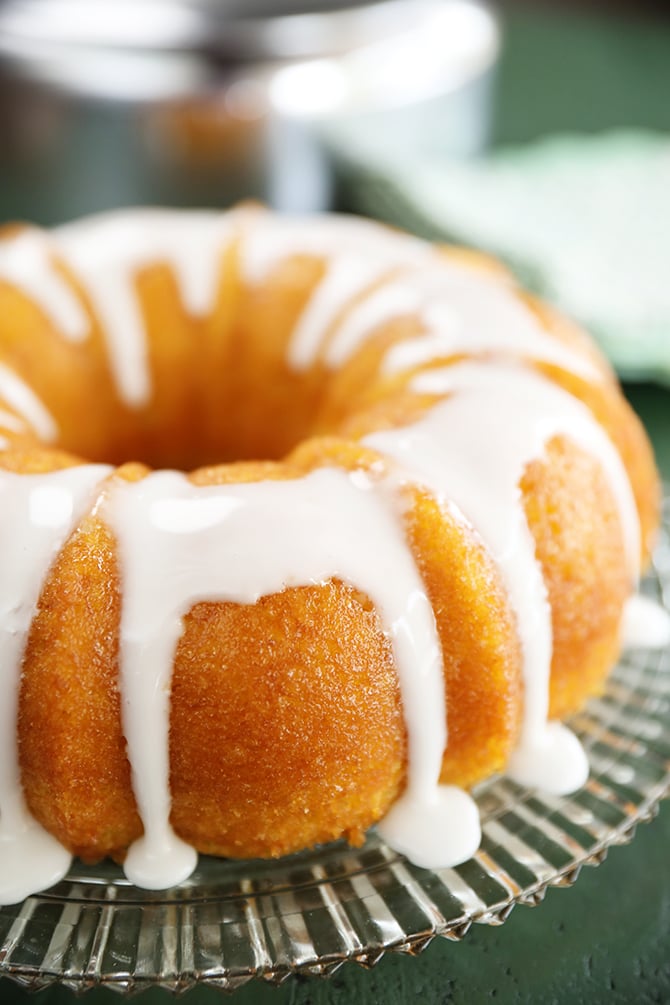 I read a post on another site that said that Duncan Hines originally introduced the recipe when they launched lemon cake mix years ago, but I can’t verify that. The crazy thing about it is that when I tested this recipe with a Duncan Hines mix, the middle fell every single time, much like it does when folks use Duncan Hines cake mixes with that Pineapple Juice Cake recipe. So, as much as I love Duncan Hines mixes, I have to recommend another brand for this recipe. I’ve tested it extensively after folks reported problems with that recipe and it seems that the amount of oil in the recipe is the culprit. 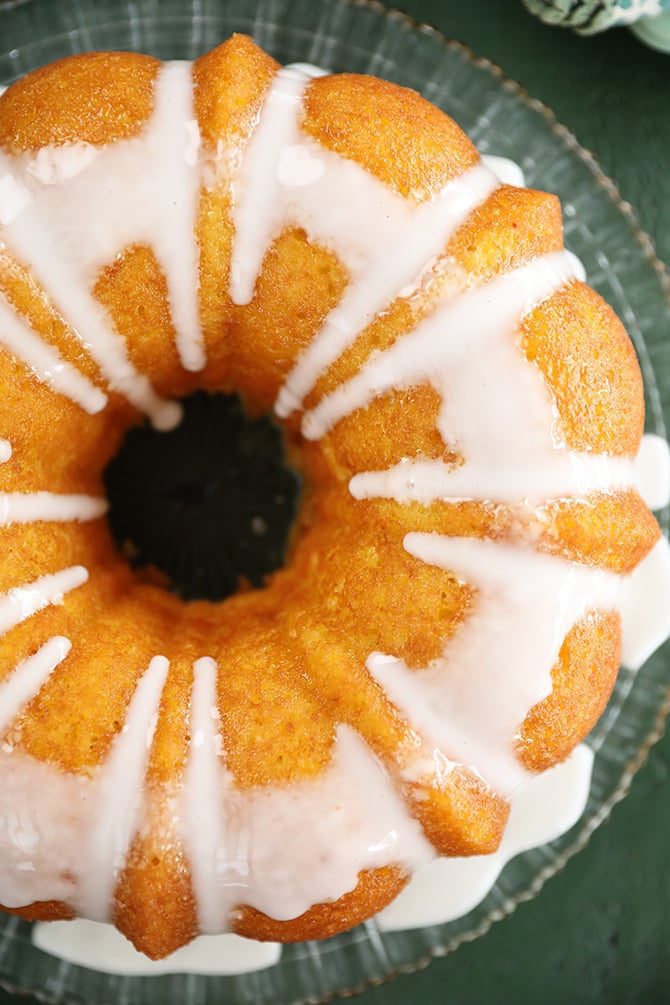 The cake is made with a lemon cake mix, and much like my Pineapple Juice Cake, it’s mixed with eggs, vegetable oil, and apricot nectar (in place of the pineapple juice). I found 2 or 3 variations of the recipe and they were all pretty consistent. All of them called for the addition of some extra sugar that ranged between 1/4 to 1/2 cup. I was worried that the additional sugar might make the cake too sweet, but I found it quite pleasant. I think the lemon helps to offset the sweetness. I even made it without the extra sugar and much preferred the version with it. 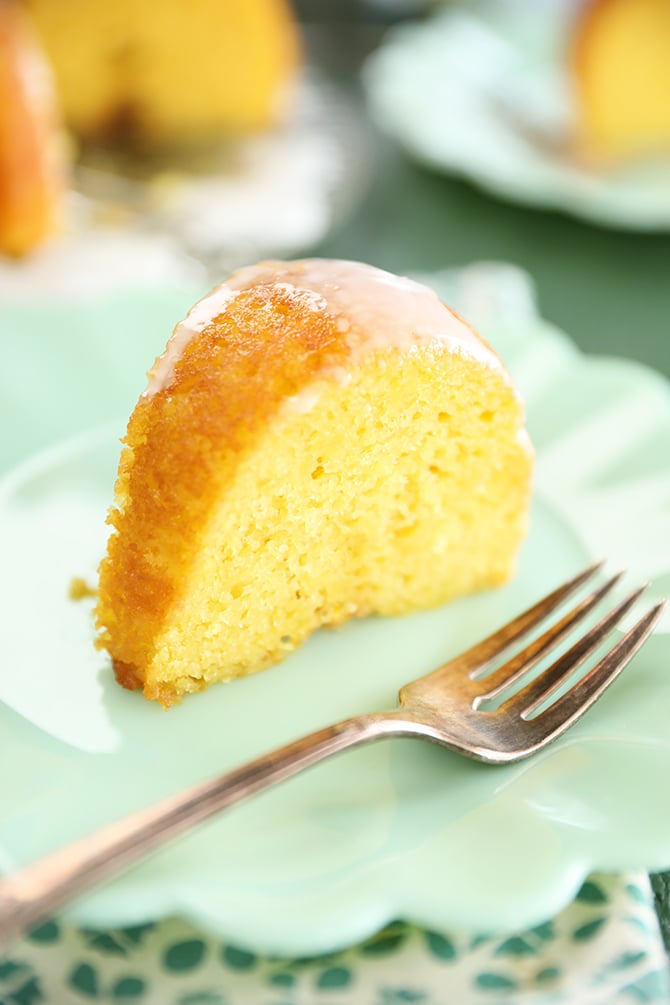 Now the lemon is the real star in this recipe. I like the novelty of the apricot nectar, but didn’t really find it to have much apricot flavor. Regardless, it makes for a super moist lemon cake that everyone who’s tasted it just loved. With that being said, I think you could use other juices or nectars, if you so desired. My local grocery store had canned nectars that ranged from peach and apricot to coconut-pineapple, strawberry, even strawberry-banana. So there are tons of great options! 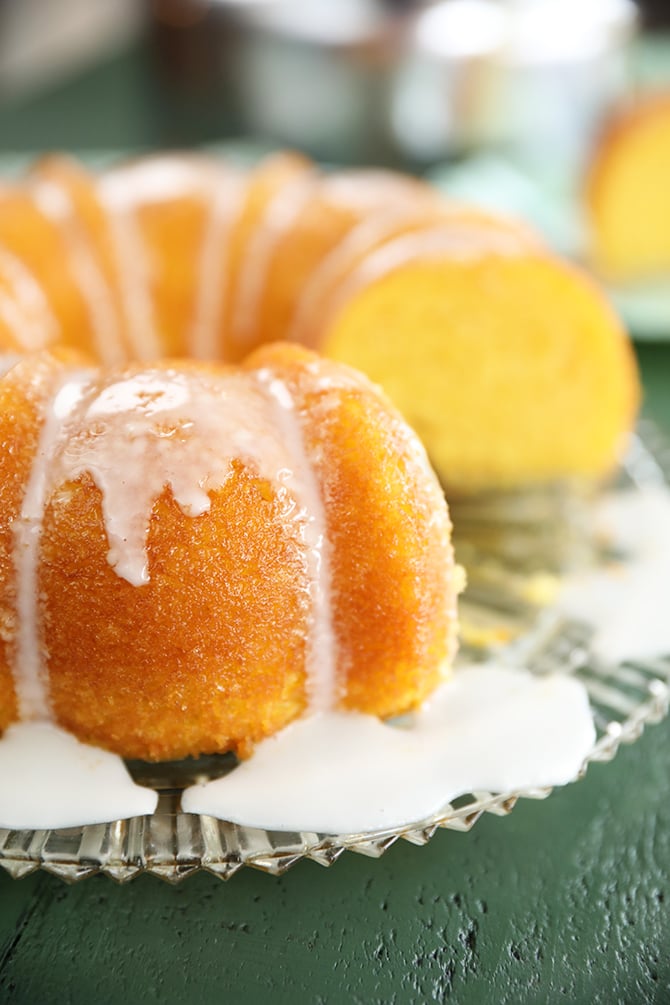 One thing that I noticed in my research is that the thing that varied the most from recipe to recipe was the glaze. Some recipes called for 1 cup of powdered sugar to 2 tablespoons of lemon juice for the glaze which made a thick, white drizzle that was beautiful on the top of the cake. It’s the one pictured here. A few other recipes called for more lemon juice – sometimes as much as 6 tablespoons – to 1 cup of powdered sugar which made a much more thin, translucent glaze of sorts that coated the outside of the cake. I made it both ways and found both delicious so I decided to give you the option to make it how you might remember it. Regardless, it’s going to be delicious!

Another thing that bears mentioning is that I did have some trouble with this cake sticking to the pan when turning it out. I tested it 4 times in the same pan that I always bake bundt cakes in here in the test kitchen and it stuck every. single. time. I tried everything from reducing the sugar amount in the cake to using varying grease and flour methods on the pan. I ended up bringing one of my old pans from home (it’s probably older than me) and it popped right out – first try. And I only used the baking spray with flour in it to coat the pan. That being said, I have found that the old-school grease and flour method is the most reliable.  Just also be sure to pick a pan that you usually don’t have any trouble with it sticking. 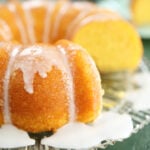 Some folks remember this cake having a white "frosting" of sorts that was drizzled over the cake. Others remember more of a liquidy glaze that coated the outside of the cake. Use less lemon juice for it to resemble the pretty white drizzle or more juice for it to more fully coat the cake and soak in.

Did you make my Vintage Lemon Apricot Nectar Cake?I'd love to see! Share on Instagram, tag @southernbite, and use the hashtag #southernbite!
Tag on Insta Leave a Rating 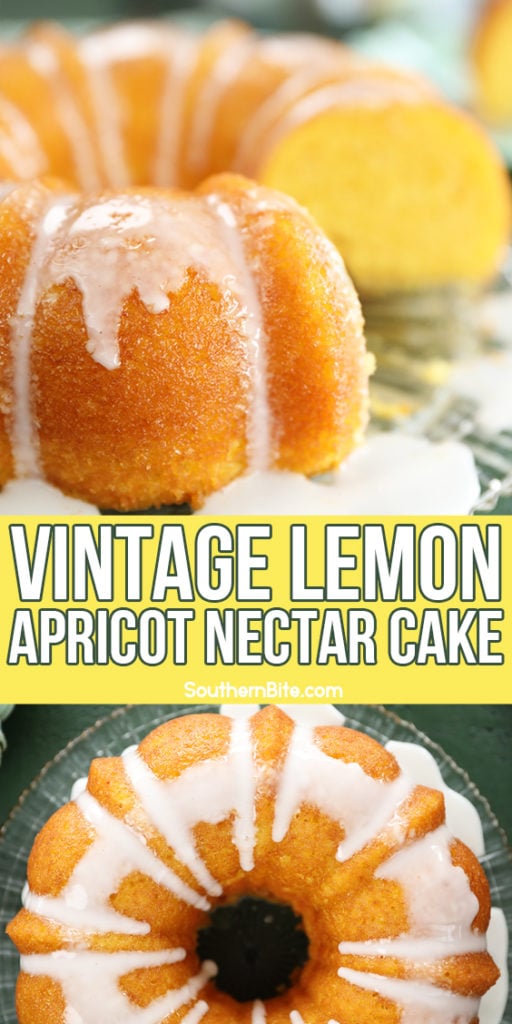