This post is sponsored by my friends at the National Pork Board, but the opinions expressed here are all my own- just as always. Thanks for supporting the brands that support my family and me. 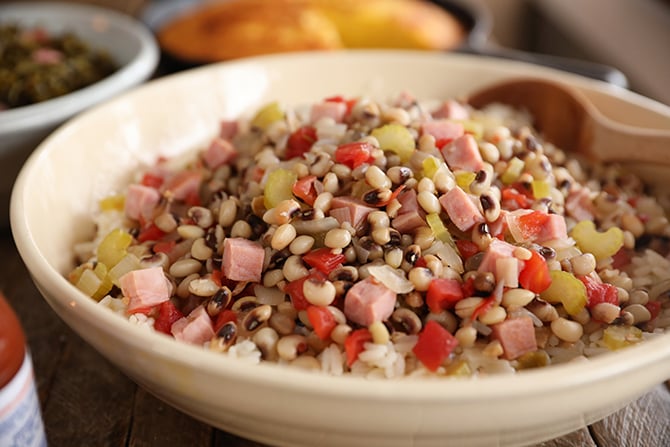 The South is a place that’s steeped in tradition – not unlike other places, I’m sure. But there’s something quirky about the traditions and superstitions that make up the holiday season in the South – especially New Year’s Day.

Now, every culture has some pretty interesting traditions around the New Year’s holiday, and most of them are built on the idea that carrying out a specific task will guarantee good luck and prosperity in the new year.  In Spain, they eat 12 grapes at midnight. In Brazil, they throw white flowers into the ocean. In Greece, they hang onions on their doors. It’s a Danish tradition to throw plates at friends’ and neighbors’ front doors. In Turkey, they sprinkle salt on their doorsteps at midnight. And while us in the American South have some traditions like that as well, most of the focus here is on the meal on New Year’s Day. 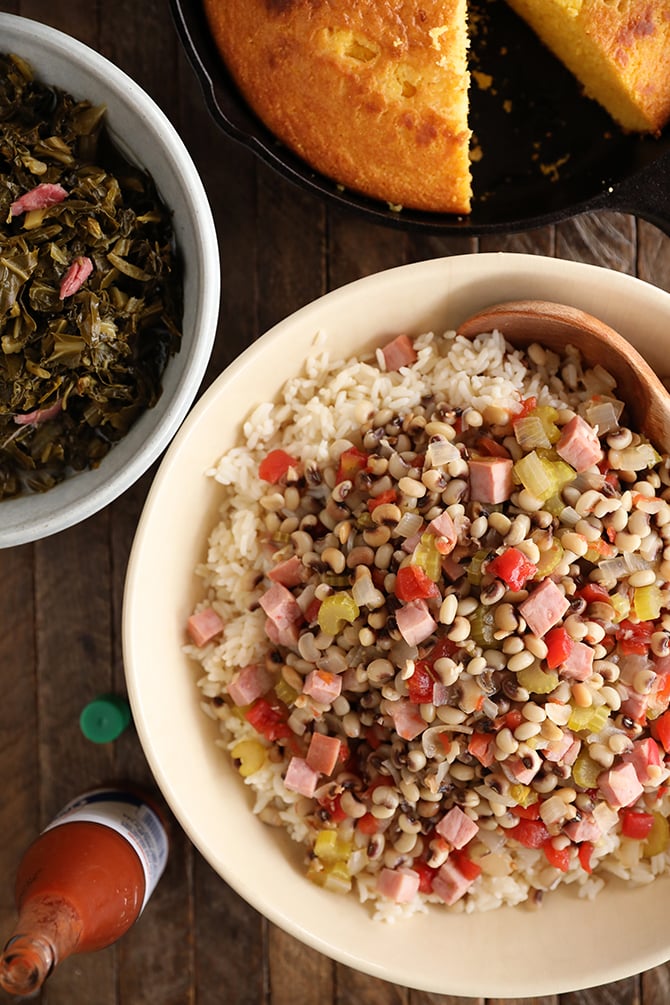 It has always been a tradition, in my family, to gather for a big meal on New Year’s Day. Spending time with family is always important around the holidays, but especially on the first day of the new year. If 2020 has taught us anything, it’s the the time we have with family is incredibly valuable. In fact, if 2020 were to have a silver lining, it’s that a recent survey by the National Pork Board showed that more than half of the families they surveyed said that they’ve been cooking more over the past 6 months. Even teenagers reported enjoyed catching up with family over meals. It’s all evidence that the folks that are gathered around the table this New Year’s Day are an important part of our family story, but what’s on the table is pretty important too.

My grandmother has always been pretty superstitious and those superstitions are on full display on January 1st. She insists that you can’t wash clothes on New Year’s Day or you’ll find yourself washing the clothes of a close relative for the last time in the coming year. Any time you walk out of the house, you have to bring something back in with you. And she absolutely mandates that greens, black-eyed peas, cornbread, and pork be on the menu. 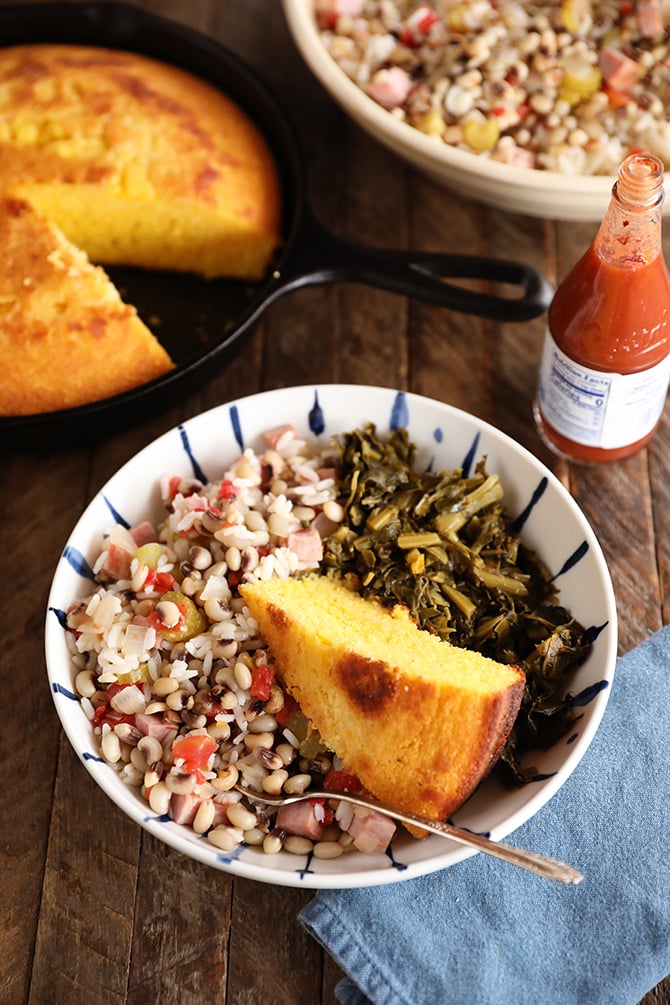 Greens, be they collard greens, turnips greens, cabbage, spinach, etc. are a must on the New Year’s Day menu as legend says that they represent money. Eating them on New Year’s Day means you’ll be blessed with riches in the coming year.

Black-eyed peas are always on our menu as my grandmother says they represent good luck. Some folks even go as far as eating 365 black-eyed peas, sometimes called cowpeas, for each day of the new year.

Cornbread is also required as the golden color is said to symbolize riches and prosperity as well. 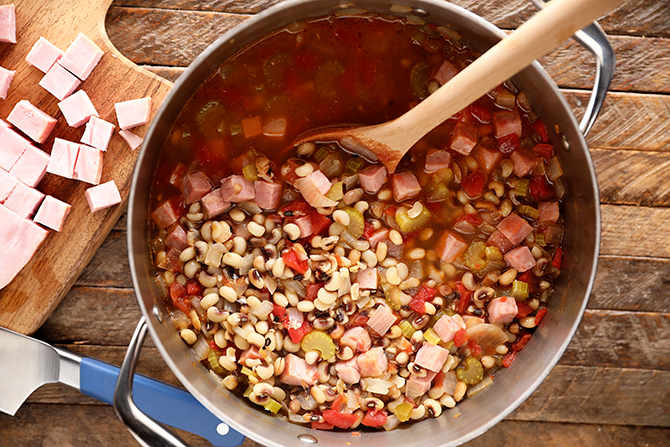 And last, but certainly not least, is pork. In any way, shape or form. In fact, we often have pork as an ingredient in many of the dishes we have on New Year’s Day as well as having it as the entree. As is common with many traditional Southern dishes, we season our greens and our peas with pork in the way of smoked ham bone, smoked ham hocks, or even diced smoked ham. The smoky flavor of the pork adds a depth of flavor to those dishes that is an integral part of the dish itself. It’s said that pork is an integral part of any New Year’s Day menu because it brings prosperity as well. As pigs root forward, it’s a sign of moving forward into the new year.

But one of my favorite dishes for New Year’s Day actually isn’t super traditional in my family. In fact, I was an adult before I ever had it. And that dish is Hoppin’ John.

This rich dish of black-eyed peas, rice, and pork is a staple of the New Year in the Carolina Low Country. And while there are several theories about how it got its name, the origin of the dish itself lies with the Gullah people. The Gullah are direct descendants of enslaved West Africans who were brought to America to work the rice and cotton plantations. They are also most likely the reason we have black-eyed peas today.

When it comes to the name, some say it was named after a hobbled man who sold rice and peas on the streets in Charleston. Others think it comes from the fact that slave children would hop around the table in anticipation of the dish being ready to eat. That said, many food histories believe that the names come from a simplified version of the French term for dried peas, “pois pigeons” – pronounced like “pwah pee-jon.”

Oddly enough, right before the holiday break, Jack had a project at school on the Gullah people and it was a great way to connect what he had learned about them with food that he’s seen on our table. Those kinds of connections help us learn about other cultures and our own cultures as well. 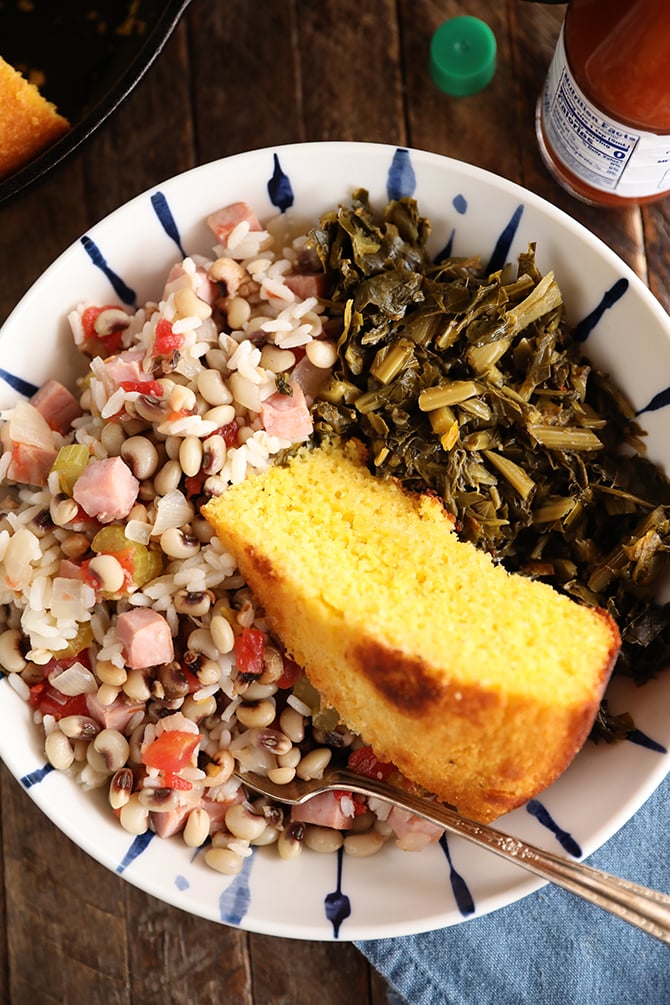 Now, I’ve put my own little spin on this dish by incorporating a can of tomatoes with chilis for a little acid and have opted to use frozen black-eyed peas rather than dried to speed up the cook time.

When it comes to the pork in this dish, I went with chopped smoked ham to turn this into a meal all unto itself. That said, I’ve made it with some smoked ham hocks and even a leftover ham bone. The trick is to make sure you use smoked pork so you get that nice smoky flavor. I typically serve this with collard greens and cornbread – as is traditional in the Carolinas – and often just mix it all together for one big bowl of comfort. 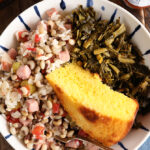 I chose to use frozen black-eyed peas in this recipe for a shorter cook time, that said, you can use dried peas as well. Simply follow the directions on the bag to soak the peas (if desired), then add them and about 2 extra cups of broth at the same time you'd add the frozen peas in the recipe. The cook time will take considerably longer and you may have to add some additional broth as necessary. Typically, it will take 1 to 1 1/2 hours to cook the peas until tender.

Did you make my Southern Hoppin' John?I'd love to see! Share on Instagram, tag @southernbite, and use the hashtag #southernbite!
Tag on Insta Leave a Rating 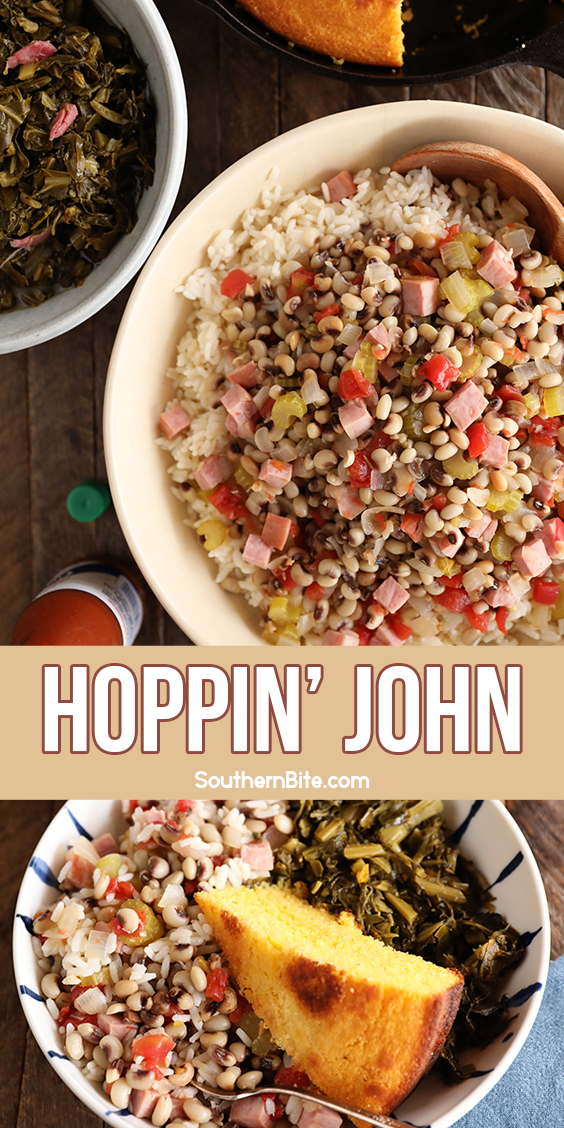