This Summer Succotash is the perfect recipe to take advantage of that summer vegetable bounty. Salty bacon, sweet corn, lima beans, okra, and tart tomatoes combine in a dish that tastes as good as it looks! I’ve included the measurements for frozen vegetables as well, so you can enjoy this dish all year round!

There is hardly a better way to showcase fresh, crisp, beautiful vegetables better than in a vibrant, colorful succotash.

I’ve always been intrigued by this dish. It’s just so beautiful, but often times the dish falls a little flat – in my opinion. So, I set out to reconstruct the dish to add more flavor and include measurements for frozen replacements of the fresh veggies so you can make this any time of the year.

Well, my internet sleuthing tells me that succotash originated with the Narragansett indigenous people in what is New England today. They introduced the dish to the North American colonists somewhere in the 17th century. From there, the dish became popular in New England eventually landing a spot on many Thanksgiving tables in the northeast.

What is in succotash?

It seems that most traditional succotash includes corn, beans, and sometimes peppers. But as this dish was shared throughout the country, different places added different ingredients. Most say the South’s contribution came in the form of bacon or salt pork and okra.

For me, the traditional ingredients were obvious. Fresh corn, lima beans, and peppers build the base. After having it with green bell peppers, and having made it that way for years, I decided to swap that green pepper for a milder and sweeter orange, yellow, or red bell pepper. (Did you know they’re all the same pepper? The color just changes with amount of time it stays on the plant. The longer, the redder and sweeter.)

The addition of bacon adds a saltiness that I love and the rendered bacon fat helps to create a sauce that adds a lot to this dish. Okra adds some great flavor and helps to thicken that sauce which comes together by way of the bacon fat, chicken broth, and okra.

Rounding it out is tomatoes. While many traditional versions of this dish don’t include them, I think the color really adds to the visual appeal of the dish. The acid from the tomatoes also adds tons to the flavor profile. Wanting even more of that, I added a few tablespoons of apple cider vinegar.

The result is a dish that tastes just about as good as it looks. It’s an impressive recipe that’s perfect for those summer gatherings when the vegetables are at their peak, but is also perfect for nearly anytime of year as frozen versions of those veggies are often just as tasty!

Bacon – For me, this is a requirement. It gives the dish tons of salty, smoky flavor and some crispy texture. With that being said, for a vegetarian version, you could simply replace the bacon fat with a few tablespoons of olive oil and start with step #2.

Onion – Any onion will work, but I really prefer a sweet onion like a Vidalia.

Pepper – Avoid the sharp flavor of the green bell pepper and go for a yellow, orange or red. They’re sweeter and a bit milder. Yes, green will work – the flavor will just be a little different. I found a whole pepper to be too much flavor, so I only included half of a large pepper.

Garlic – One of my favorite ingredients, garlic adds a lot of flavor to this dish. I use 3 cloves, but feel free to use more or less.

Baby Lima Beans – Lima beans are one of the fundamental ingredients in this recipe. I opt for frozen baby limas as they’re much easier to find than fresh. You’ll need about 3 cups or a 15 to 16-ounce bag of frozen beans.

Okra – While some folks will turn their nose up at this ingredient, I think it helps to thicken the sauce and adds great flavor as well. I used about 2 cups of sliced okra which was about 6 ounces (by weight) before I sliced it.

Corn – Another required element, I opt to use a fresh, sweet corn that I cut off the cob. You’ll need 3 cups, which I found to be about 4 ears. A 14.4-ounce bag of frozen corn should give you the same measurement.

Tomatoes – I chose multicolored grape tomatoes in this recipe to add some vibrancy, but any cherry or grape tomato will work. You can also use 2 regular large tomatoes that you’ve diced.

Apple Cider Vinegar – This ingredient adds some tanginess and helps to round out the sauce you’ve built and adds a punch. 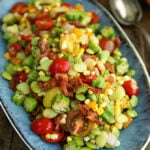 Print Pin Save
5 from 7 votes

Did you make my Summer Succotash?I’d love to see! Share on Instagram, tag @southernbite, and use the hashtag #southernbite!
Tag on Insta Leave a Rating