This post is sponsored by my friends at the Kansas Beef Council (KansasBeef.org) on behalf of the Beef Checkoff, but all the opinions are all my own – just as always. Thanks for supporting the brands and organizations that support me. 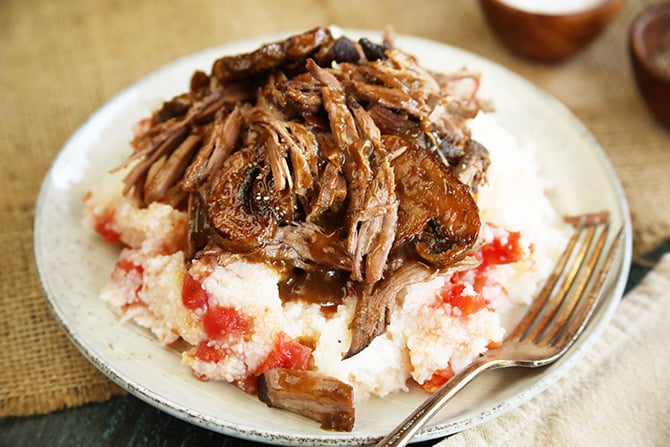 There are few countertop appliances that I use more than my slow cooker. There’s just something about popping everything in there first thing in the morning and then coming home to a house filled with the smells of dinner that’s ready to eat!

And while I love using my slow cooker for a variety of things, turning a beef roast into tender perfection is probably my favorite thing to do with this kitchen workhorse.  That’s why I love this recipe for Slow Cooker Pot Roast with Tomato Grits so much.

Obviously y’all know I love easy and this recipe doesn’t stray from that principle.  It’s easy, the prep is quick, and even making the grits is pretty fast.  You’ll probably spend less than 30 minutes prepping this meal and that makes it even better!

And then there’s the taste.  This creates a slow cooker full of fork tender, beefy goodness that is probably one of my favorite comfort foods.  The savory beef combined with the creamy grits and tangy tomatoes makes for the perfect bite! 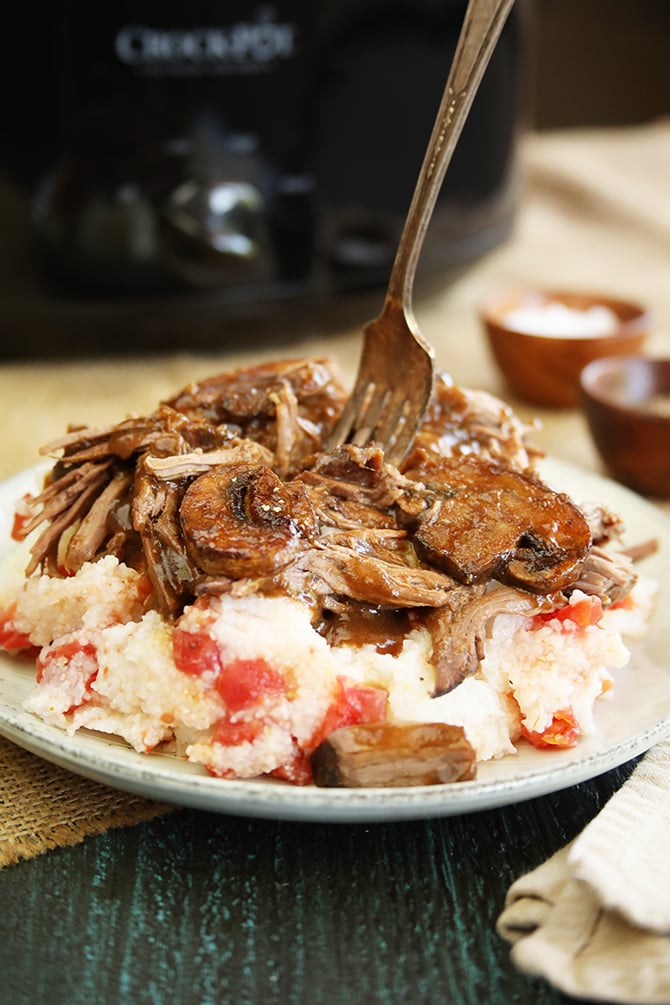 On my blog, I love showing you just how easy it is to prepare a home cooked meal but I think it’s also important to learn why we do the things we do.  In the end I think it makes us all better cooks.  So let’s take a little journey and let me show you some of the why behind this slow cooker pot roast.

Let’s start by understanding why we use a slow cooker.  Honestly, because it’s easy. The slow cooker (A.K.A CrockPot – which is a brand name of slow cooker) allows us to slow cook without much hands-on work.  It’s great for turning tougher cuts of meat (which also often means cheaper) into moist tender bites. Which brings us to another question…

Why do we use a chuck roast?  Tougher cuts like chuck roast and brisket are filled with connective tissue (collagen) which means they really need to cook on low for a long time to allow the collagen to melt into gelatin.  Collagen makes for a tough bite.  Gelatin makes for a tender, juicy bite. That’s what makes the slow cooker method perfect for this type of meat.  Opting for more tender cuts of meat like filet/tenderloin will result in super tough, overcooked meat if you were to do those in the slow cooker because they should be cooked quickly and with high heat, not low and slow.

The other reason I like to use a chuck roast is it has tons of that super rich, beefy flavor I love in pot roast.

Thinking about something different?  Be sure to check out this list of other cuts that also do great in the slow cooker. 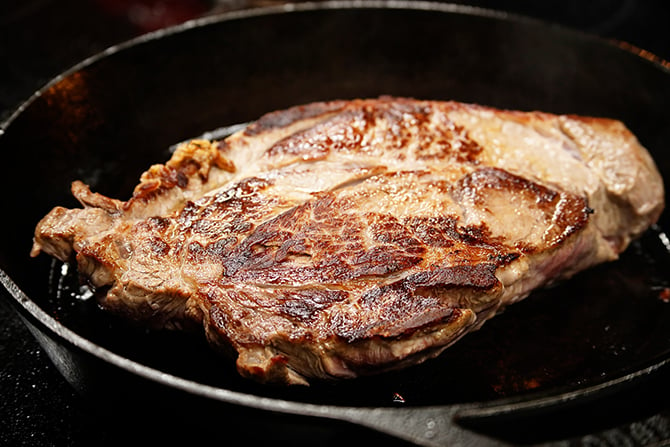 Do I have to sear it first before it goes in the slow cooker?  The short answer is no. But there’s a but at the end… First, let me clear up that confusion at searing meat “seals in the juices,” as you’ve probably heard.  That’s just not true. And even it it was true, we’re cooking in more liquid, so it wouldn’t really be an issue here.  But, what searing does do is add flavor.

When we brown meat by searing it on relatively high heat, we’re working to turn amino acids and reducing sugars into golden brown deliciousness.  That chemical reaction is called the Maillard reaction.  It sounds technical, but the important thing is that it’s a great way to add flavor.  That said, if you’re in a hurry, you can totally skip this step and will still have a delicious supper, but the little bit of extra work is worth the effort if you’ve got the time. 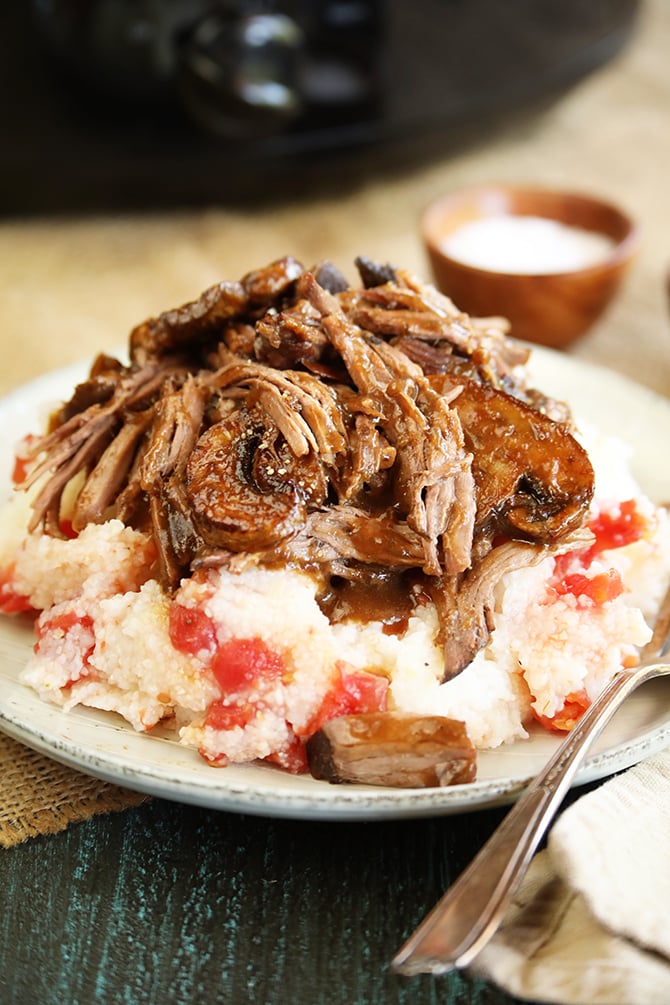 My gravy always ends up too runny! One of the most common complaints that I get about slow cooker recipes is that the gravy or sauce is too thin at the end of cooking.  Since we’re using a moisture rich method of cooking, it’s just what’s going to happen.  The fix is super easy and works in nearly all the recipes.  Simply remove the meat and or veggies to a plate or bowl and cover them to keep them warm.  Then mix about 1 tablespoon of cornstarch with 2 tablespoons of cool or cold liquid – like water or the broth you used in the recipe.  What you’re making is slurry.  Whisk it together really well then whisk that slurry into the liquid in the slow cooker.  Cover it and turn the slow cooker on high.  Cook for about 20 minutes or until the the gravy has thickened.  Then add the meat and veggies back.  If you do this first thing when you get home, you’ll have plenty of time for it to thicken up while you finish up the rest of the meal.

Why are you using quick grits and why are you cooking them so long??? If I’ve heard it one time, I’ve heard it a thousand times. “No self-respecting Southerner would ever use quick grits.” Hey, guess what!?!?  I’m about as Southern as they come. I do respect my self. AND I use quick grits!  Here’s why… When I get home and the roast is smelling super delicious, I don’t want to wait another 30 to 40 minutes for the grits to cook. Quick grits are ground a bit finer than stone ground so they cook faster, but they’re made from the same corn.  That said, I always cook grits longer than the instructions on the packages say.  I want smooth, creamy, tender grits – not a mouth full of gravel.

Also, keep in mind, these are quick grits, not instant grits.

So there you have it, a little more WHY than usual, but I thought this would be a grand opportunity to help you understand the reasons we do some of the things we do.  As I said before, I think it makes us better cooks in the long run and helps us understand how to fix things when they go wrong.

Y’all are just going to love this recipe. And if grits aren’t your thing, you can serve this with mashed potatoes, rice, just about anything.  Pro tip: The leftover beef makes a pretty incredible sandwich, too! 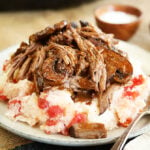 If the gravy isn't thick enough, simply mix about 1 tablespoon of cornstarch with 2 tablespoons cold water or broth.  Remove the meat from the slow cooker and whisk the corn starch slurry into the gravy.  Turn the heat up to high, cover, and cook for about 20 minutes or until the gravy has thickened.  Add the meat back and mix to combine.

Did you make my Slow Cooker Pot Roast with Tomato Grits?I'd love to see! Share on Instagram, tag @southernbite, and use the hashtag #southernbite!
Tag on Insta Leave a Rating 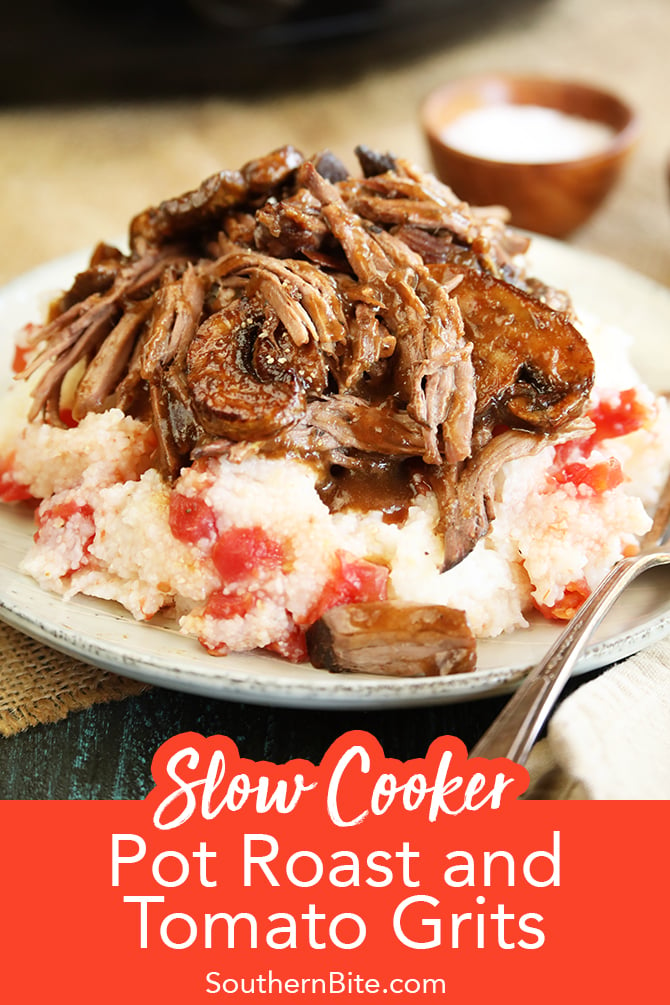