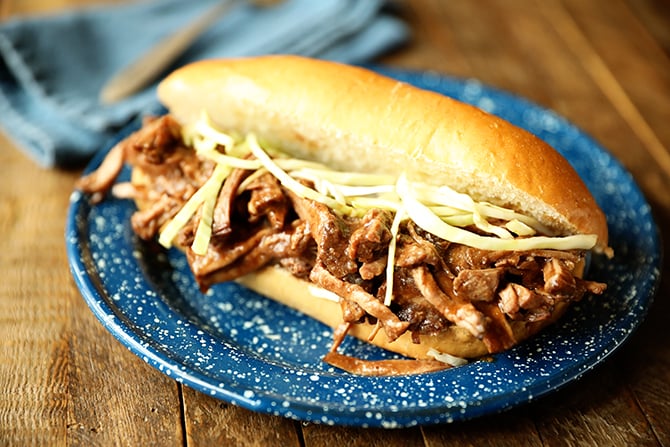 Comfort food. It’s something we’re craving now more than ever. But what is it really?

The truth is, it just depends. Each person’s definition of comfort food is a bit different.  Often it’s food related to a specific memory. Maybe it was your favorite meal that your mom made when you were a kid. Maybe it’s warm chocolate chip cookies. Maybe it’s a gooey, cheesy casserole. For some folks it’s pizza. For others it’s pasta.

In all honesty, I have quite a few comfort foods. You can look at me and tell that. But one of them, is beef and gravy. But not just any beef and gravy… it’s a roast beef debris po’ boy. 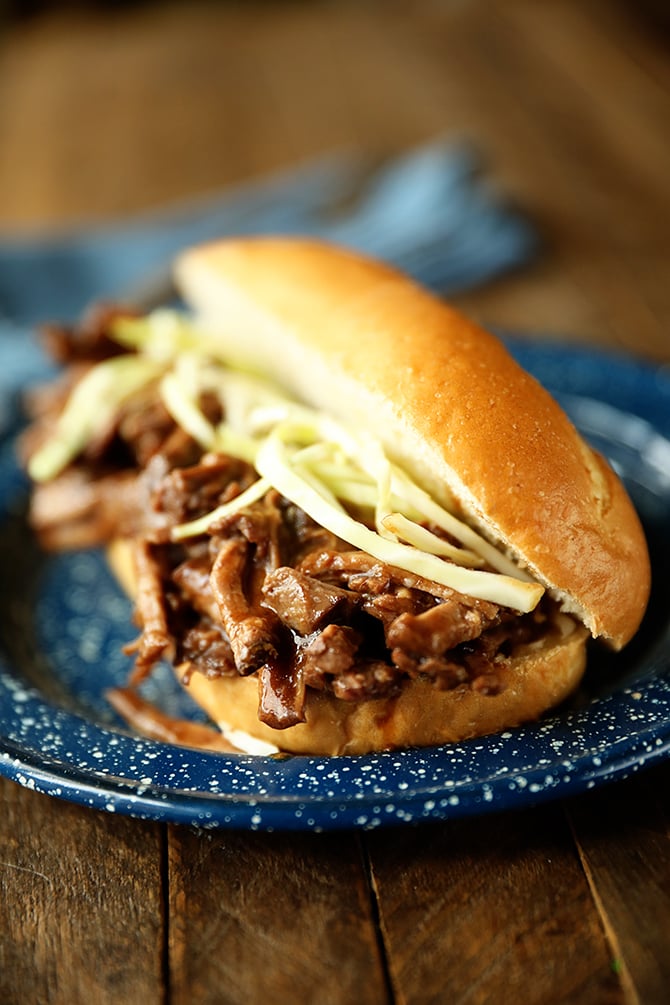 As I’ve been told, Benny and Clovis Martin owned a coffee and sandwich shop in New Orleans near the French Market in the 1920s. When a streetcar conductor strike happened, many workers went without work and of course went hungry. Being former streetcar workers themselves, the Martin brothers took pity on the folks on strike and worked to feed them with leftover meats and breads they had each day. They would build the scraps into sandwiches and hand them out to the “poorboys” who were out of work. The name became synonymous with the sandwich. It then was typically shortened to po’ boy.

Today po’ boy sandwiches are filled with just about anything you can imagine – though fried seafood, ham and cheese, and roast beef are traditional. 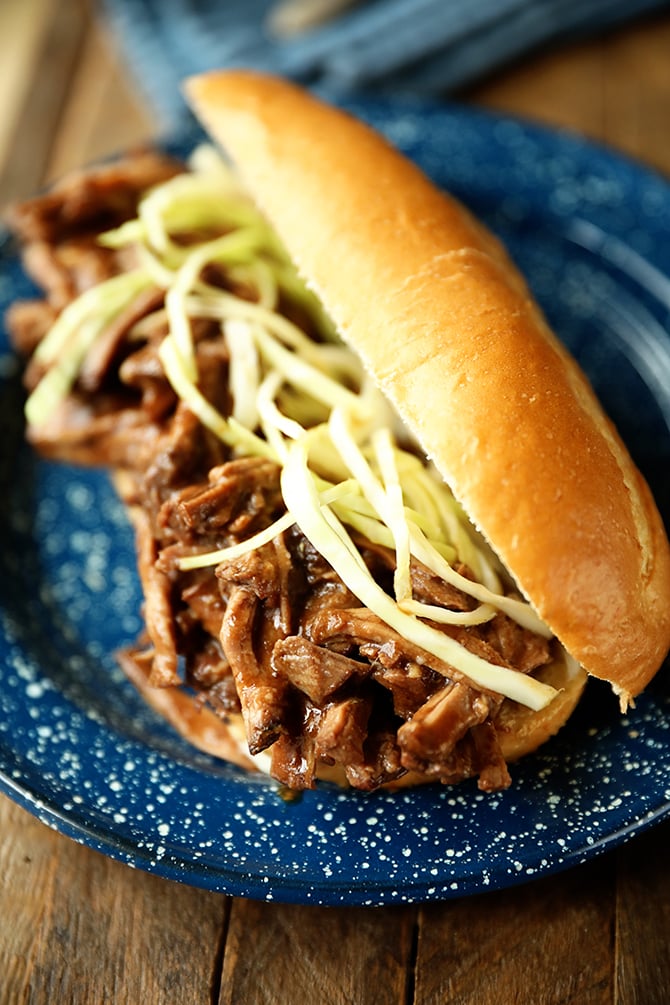 The folks down at Mother’s Restaurant in New Orleans lay claim to the specific debris po’ boy and say that debris (pronounced day-bree) is all the stuff that falls off the roast beef while its cooking, mixed up in the rendered beef fat and juice.

It’s evolved a little bit over time and is now more of a sandwich made up of super tender, fall-apart, shredded roast beef, gravy, and fixings. At Mother’s those fixings are mayo, creole, and yellow mustard, shredded cabbage, and pickles and my affinity for their sandwich is exactly why I’ve made this one the same way.

But again, this isn’t a regular old roast beef sandwich. What makes it different is how super tender the meat is and all that delicious gravy. This is a gravy-running-down-your-arms kinda sandwich. You’re seriously gonna need some napkins here.

Oh and then there’s the bread.

For me, making a true po’ boy calls for only one kind of bread. Leidenheimer bread. It’s got a super light, almost cotton candy-esque, interior and amazingly crisp exterior. It’s perfect for sopping up all the juicy gravy from the meat. And while I’m fortunate enough to have a local restaurant that uses the New Orleans classic bread that will sell me some, I know not everyone has a source for the stuff. So opt for a light, tender French bread style sub roll and toast it in the oven for a few minutes to try and recreate that crispy exterior. It ain’t perfect, but it works.

Here’s the thing… regardless of the exact ingredients, meat, bread, and gravy can’t be a bad thing. So if you’re needing a little comforting, you need to try this out! 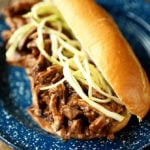 Did you make my Slow Cooker Roast Beef Debris Po' Boys?I'd love to see! Share on Instagram, tag @southernbite, and use the hashtag #southernbite!
Tag on Insta Leave a Rating 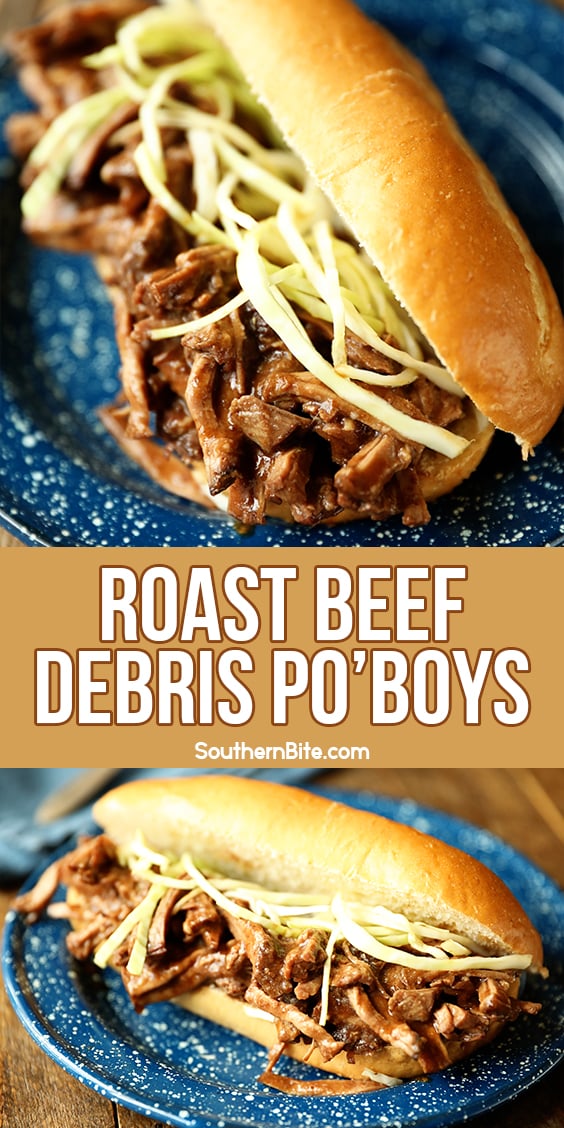