This post is sponsored by my friends at Tony Chachere’s, but all opinions expressed are my own – just as always.  Thanks for supporting the brands that support me and my family. 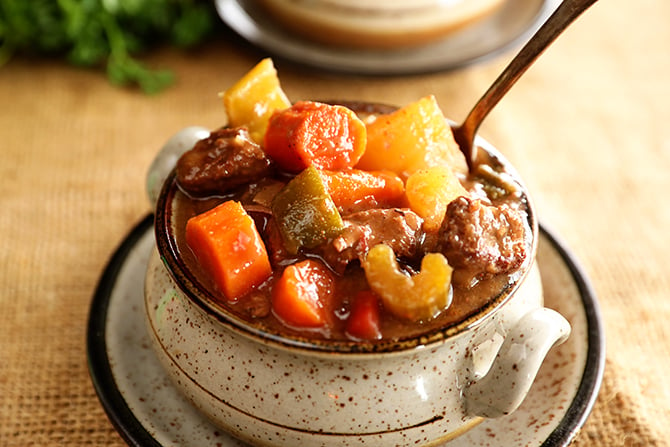 Beef stew has always been one of my most favorite comfort foods.  There’s just something about that rich, savory gravy that tastes like home.

I remember mom making beef stew often. Stew meat was relatively cheap and that, combined with the other inexpensive ingredients, made it an affordable way to feed the family.  But it never tasted like the frugal meal it was. It always seemed like so much more. 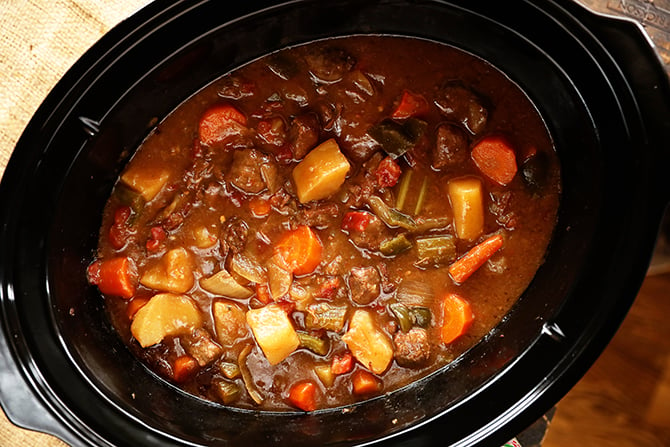 Mom always pulled out the slow cooker for this dish. Slow cooking is the perfect method to get that fall-apart tender beef and decadent gravy.

The one disadvantage to using a slow cooker is that often the gravy doesn’t turn out as thick as you’d like. It’s because the slow cooker traps all the moisture inside. That’s great for the meat and veggies, but not great for the gravy. Fortunately, there’s a relatively easy fix for that.  It works great in this case and in most cases where your gravy is a bit on the thin side when slow cooking, so be sure to check out the notes section of the recipe below. 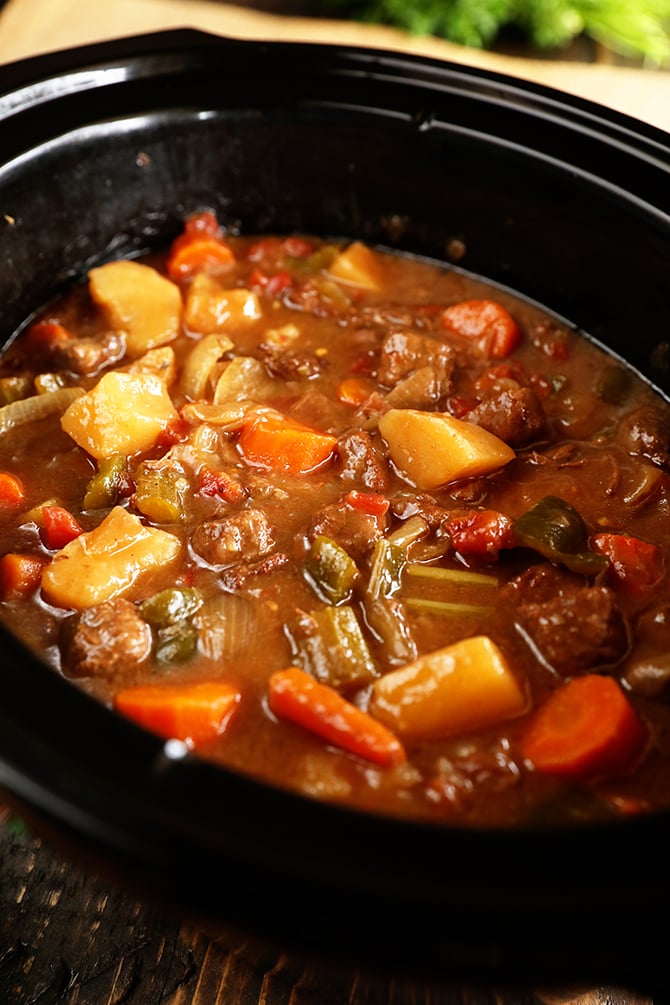 This version is a touch different than mom used to make – with the addition of some green pepper, tomatoes with green chilis, and some Tony Chachere’s Creole Seasoning.  I really love the extra flavor that’s packed into this one.

And despite the fact that mom never put tomatoes in hers, I think those might be my favorite part. The creole seasoning adds a hearty boost of flavor without adding a ton of heat. It’s also great because it takes the place of the salt, pepper, and other seasonings you’d have to use in this recipe. 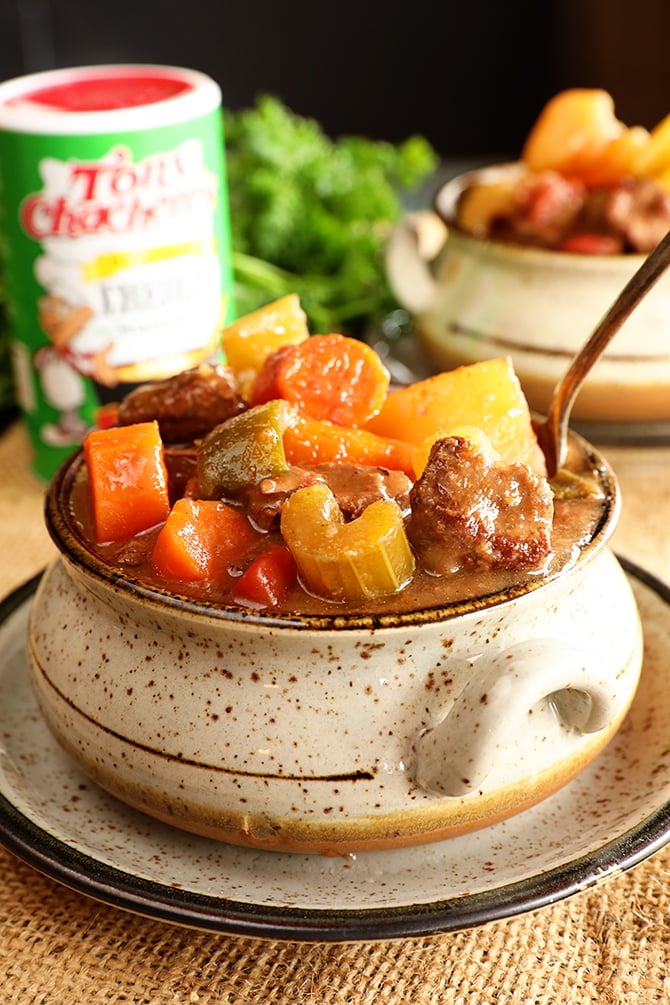 So grab the slow cooker and get ready to whip up some of my Hot Water Cornbread to go on the side, because while the weather is still a bit chilly, we’re making beef stew!  Y’all enjoy! 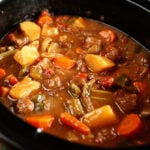 If at the end of the cooking time, you find the gravy to be too thin, simply mix together 2 tablespoons of corn starch with 2 tablespoons of cool water in a small bowl.  Whisk the mixture (it's called a slurry) into the stew.  Cover and turn the heat on high until the gravy has thickened.

Did you make my Slow Cooker Creole Beef Stew?I'd love to see! Share on Instagram, tag @southernbite, and use the hashtag #southernbite!
Tag on Insta Leave a Rating 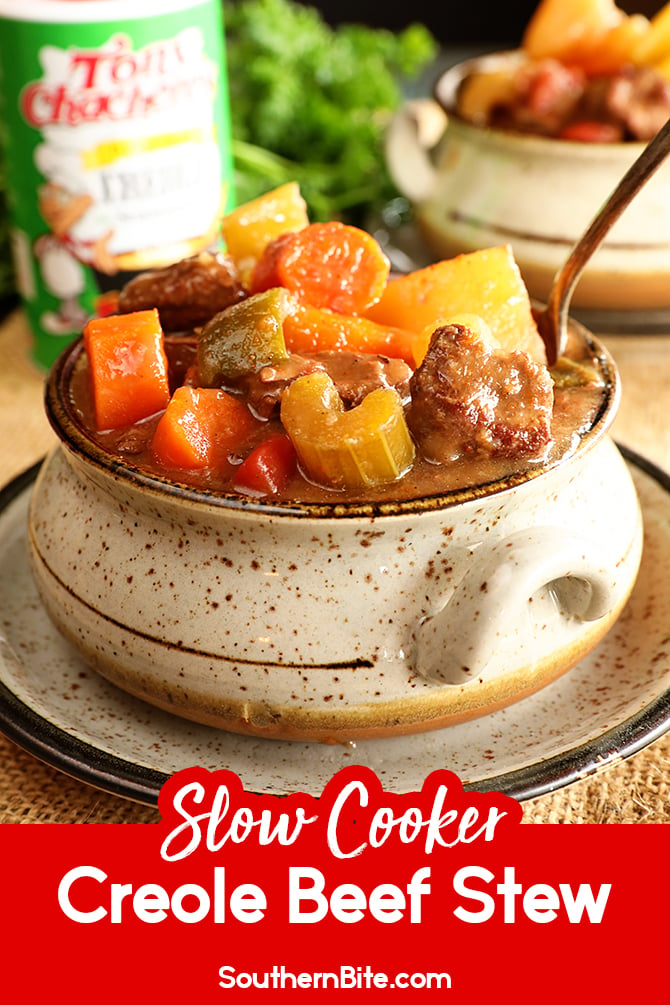