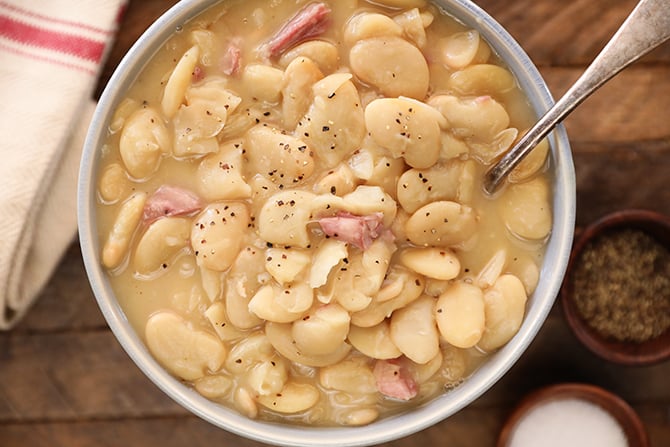 Now, I’ll admit I grew up calling these large limas or dried limas and called their smaller green to cream colored fresh counter parts butter beans (like these). And I’m not alone. I surveyed y’all on Facebook and saw that quite a few follow my naming nomenclature, while others were the opposite. Many of you call these large dried beans butter beans. And with more than 1,000 replies at last check, y’all are pretty passionate about what you call ’em.

Here’s what I know for sure… Call them whatever you will. Just don’t call me late to supper when these babies are on the menu. 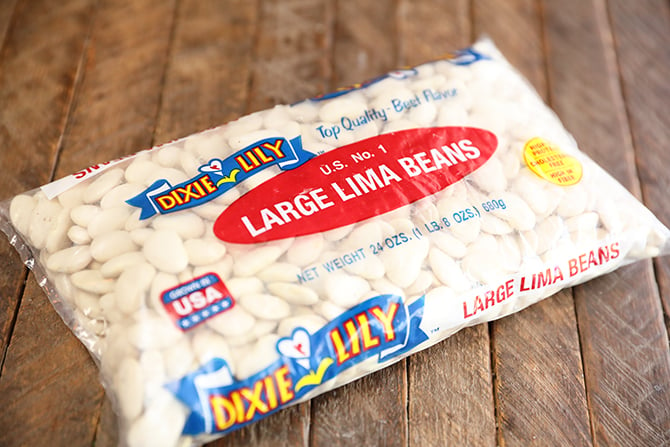 My recipe for cooking them is simple, straightforward, and only calls for a handful of ingredients, but it’s the method that really matters. Let’s jump in…

Now, my mom taught me that with all dried beans, they need to be soaked before cooking – whether using the overnight or the quick soak method. Now, since I know she’s reading this (Hi, Mom!), I’ll fall short of saying she’s wrong, but I will say that we now know better. Yep, modern science and testing have revealed that soaking beans really doesn’t do much other than cut down on the cook time (which isn’t a huge difference anyway).

Since it’s how I learned to cook, I’m a strong proponent of the philosophy that the way your mom or grandma did it is the right way. So if you want to soak your beans, by gosh you need to soak those beans. But the truth is that if you don’t have time to soak, (or just don’t want to) you’re going to come out with some super delicious beans either way. 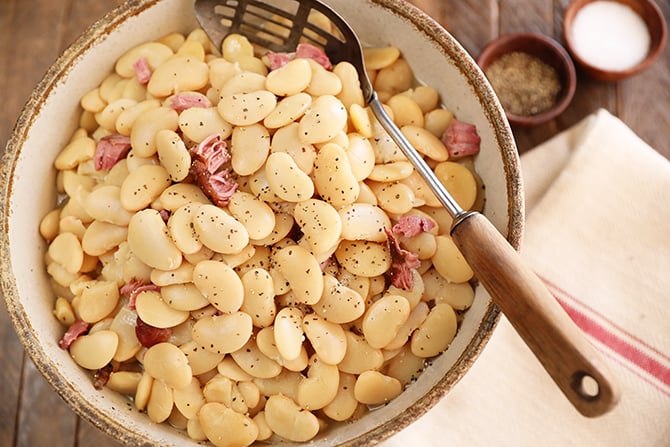 Now for me, these large dried limas should be swimming in a thick, rich broth that’s super creamy. It’s the way mom made them and after a few tests, the trick to getting them that way is super simple. You have to stir them.

You see those beans right above here? Those beans were cooked  using the exact same method and ingredients, but I only stirred them twice. The result is mainly whole beans and a relatively thin, clear broth.

Now these down here below were stirred quite a bit more. The stirring broke some of the beans up and the starch from those beans thickened the broth and made for a hearty, thick sauce to coat the beans. This is how Mom made them.

Either way is delicious, it’s just all in how you like them. 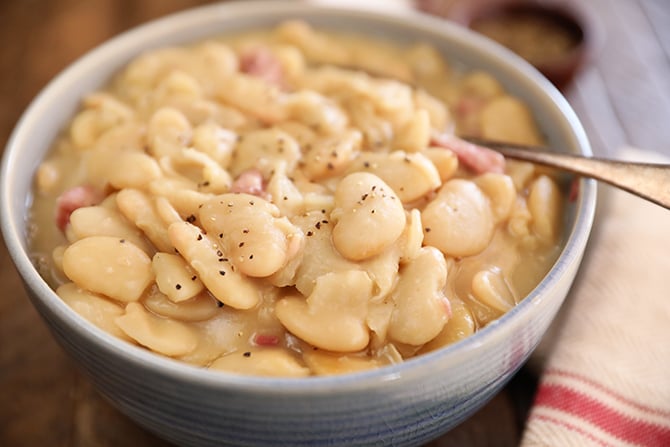 Now while some recipes calls for onion, garlic, even carrots, Mom made her beans with just water, smoked meat, salt, and pepper. Often she would also include a pinch of ground ginger as many claim it helps with the uh… um, “after effects” of eating a bowl full of beans, but there’s no scientific evidence of that being true.

Outside of the beans themselves, most of the flavor comes from the salt and the smoked meat. I keep ham hocks frozen for this because I think they add the most flavor to dishes like this, but a ham bone, smoked turkey wings, smoked pork neck bones, or even smoked sausage can be used to get that smoky flavor. 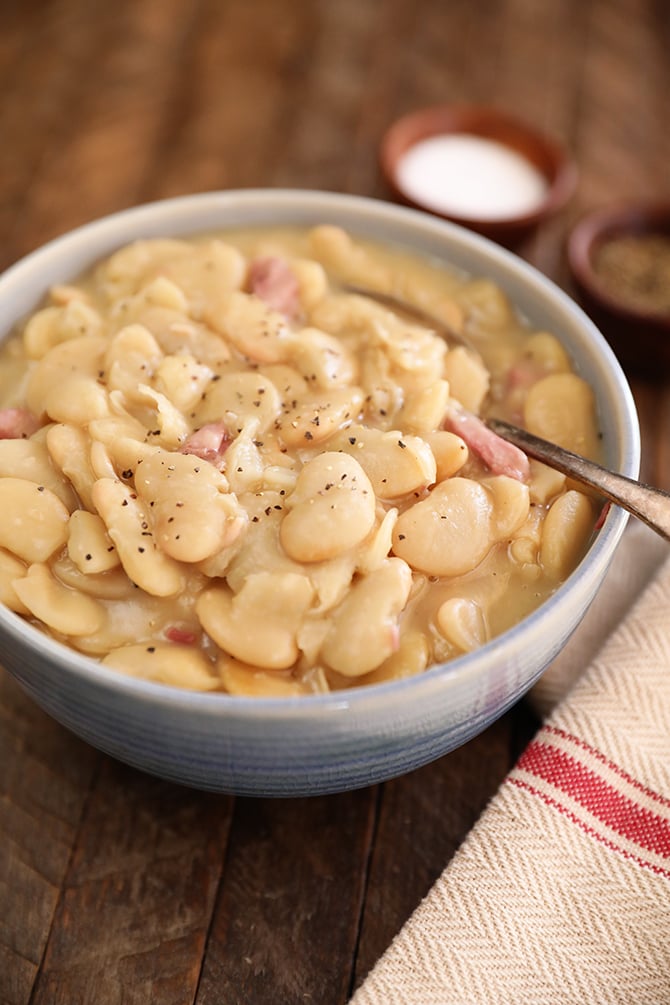 Regardless of what you call them and whether you stir them or not, these beans are a hearty, delicious side (or even main dish) that’s perfect alongside some piping hot cornbread. In my family, beans like this have always been served with some raw onion. I’ve heard others say they add mayonnaise or even ketchup to them. No matter what goes with them, I know you’re going to love them! Y’all enjoy! 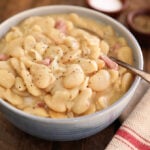 Did you make my Southern Lima Beans (Butter Beans)?I'd love to see! Share on Instagram, tag @southernbite, and use the hashtag #southernbite!
Tag on Insta Leave a Rating 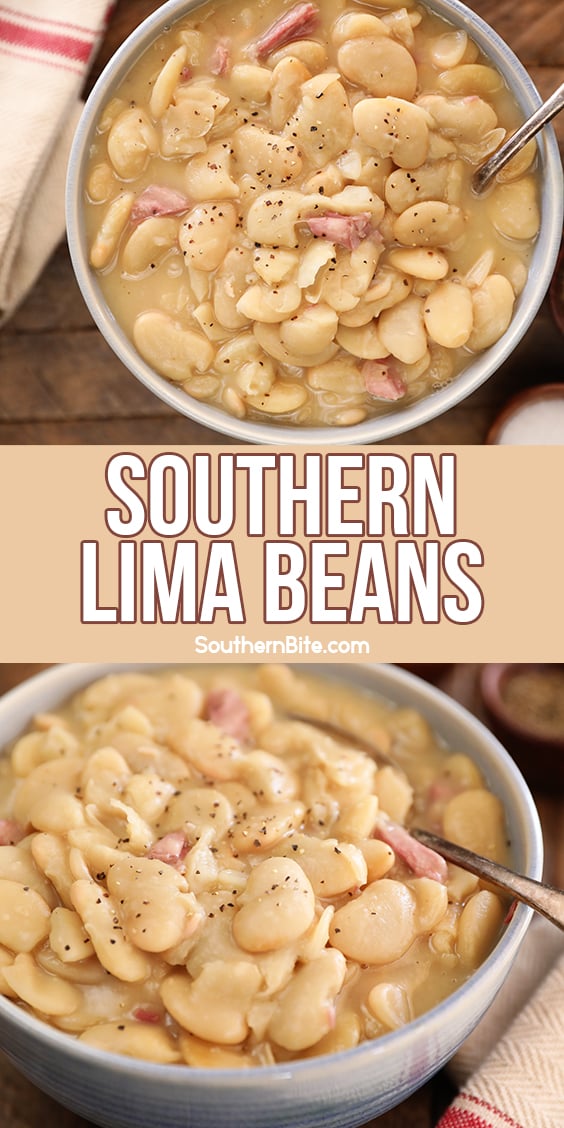