This recipe for Slow Cooker Ham and Beans is cooked low and slow with onions, celery, carrots, and ham making for a delicious bowl of creamy beans filled with savory, smoky flavor.

For me, there’s not much more comforting than a big bowl of white beans with a chunk of cornbread and some diced fresh onion. And it’s a bonus if that bowl of beans is filled with chunks of ham and smoky ham flavor.

But lots of folks are intimidated by cooking dried beans. That’s why this method of using the slow cooker is so perfect. It makes the process virtually hands off and results in tender, creamy, smoky Great Northern beans that just taste like home.

And while this recipe is amazingly easy, there are a few things I’d like to run through. Your success is my ultimate goal, so let’s walk through a few things…

Carrot – Same goes for the carrots. I used one large carrot. Feel free to use more or less.

Onion – I prefer a white or yellow onion here, but any onion should work.

Water – You could opt for broth, but I’d recommend unsalted to control the salt content. I think water works just fine and it’s less expensive. While I don’t recommend soaking your beans, if you do, you’ll need to adjust your water amount. See the FAQ below for more info on soaking beans.

Ham – I used leftover pieces of spiral sliced smoke ham because I wanted larger pieces of meat in the beans. You could use a large leftover ham bone, a few smoked ham hocks, or even smoked turkey pieces.

Ham Seasoning – This is an optional ingredient, but one that I highly recommend. Ham seasoning is a great way to add even more smoky ham flavor to lots of dishes, specially these beans. I’ve included a photo of the one I use below, but there are other options. If you’re going to use this, add it before salt as there is some sodium in this. Then you can add salt to taste.

The slow cooker/Crock Pot is the perfect way to cook beans. The low and slow method makes for tender, creamy beans with tons of flavor.

With that being said, the slow cooker does present a few challenges – all of which are easy to deal with if you know about them.

The main issue is with cook time. There are huge variations in cook time with many slow cooker recipes – and for good reason. Every slow cooker cooks differently. In fact, in testing this recipe I used two slow cookers of the same size and even same brand and they produced different results.

So just keep in mind that the time can vary a bit based on your specific slow cooker.

Everyone’s idea about the final texture of beans like this is a little different. If you prefer a more clear broth, I suggest following the recipe pretty closely.

If you want beans with a super creamy, thick broth, simply vigorously stir the beans when they’re nearly ready to eat and press some of the beans against the side of the slow cooker walls to break them up. This will help to thicken the broth and give you a super creamy texture.

This first picture below is of the beans right after cooking that haven’t been thickened. The next picture is after a vigorous stir while mashing up some beans to thicken the broth.

Do I need to soak my beans first?

As I’ve said before, I was taught that you always soak dried beans before cooking them – whether using the overnight or the quick soak method. Modern science and testing have revealed, however, that soaking beans really doesn’t do much other than cut down on the cook time (which isn’t a huge difference anyway).

I tested this recipe both ways and didn’t find a noticeable difference in texture, cook time, etc. One thing to note, though, is that if you do soak them, you’ll need less water in the slow cooker when cooking them. I recommend reducing the water amount to 6 cups if you’ve already soaked your beans. 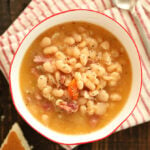 *In our tests, soaking the beans overnight made no real difference in cook time, tenderness, or other important factors, so we do not soak them. However, if you choose to soak your beans, you’ll need about 2 cups less water when cooking them.

Did you make my Slow Cooker Ham and Beans?I’d love to see! Share on Instagram, tag @southernbite, and use the hashtag #southernbite!
Tag on Insta Leave a Rating