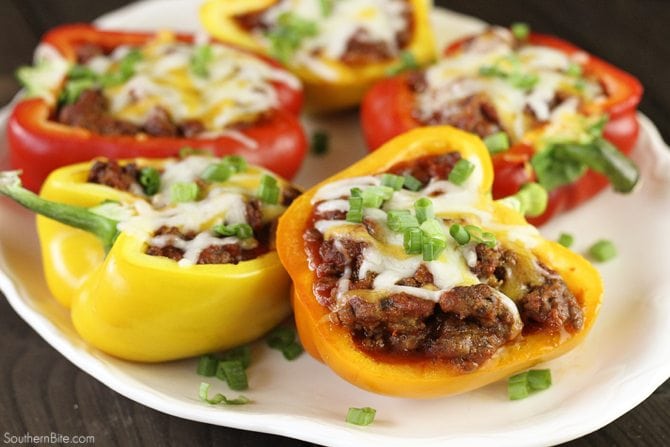 Sloppy Joe Stuffed Peppers!  I’ve just combined two of my favorite quick and easy weeknight meals!  Boom!  Seriously, these things are so easy and such a crowd pleaser.  I usually add bell pepper to my sloppy joes anyway, so cooking the sloppy joe meat in the pepper gave it even more flavor. They are also a great freezer meal.  Simply prep them right up until the baking part then freeze.    Let’s make some… 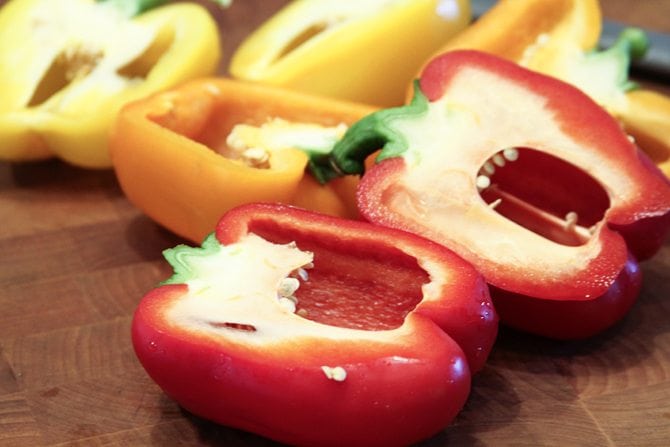 First, we’re going to slice our pepper in half – from stem down.  “But Stacey, why aren’t you slicing them the other way – like just slice the top off?”  Great question!  Because they cook faster and are easier to stuff this way.  My other stuffed peppers use that method, but this seems much easier to me.  I like to leave the stem on there too – for two reasons, really.  Number 1 – They look pretty.  Admit it.  they do.  Number 2 – If you were to cut out the stem, you’d have a hole in the end of your pepper and the stuffing would run out.  Just don’t eat the stem. 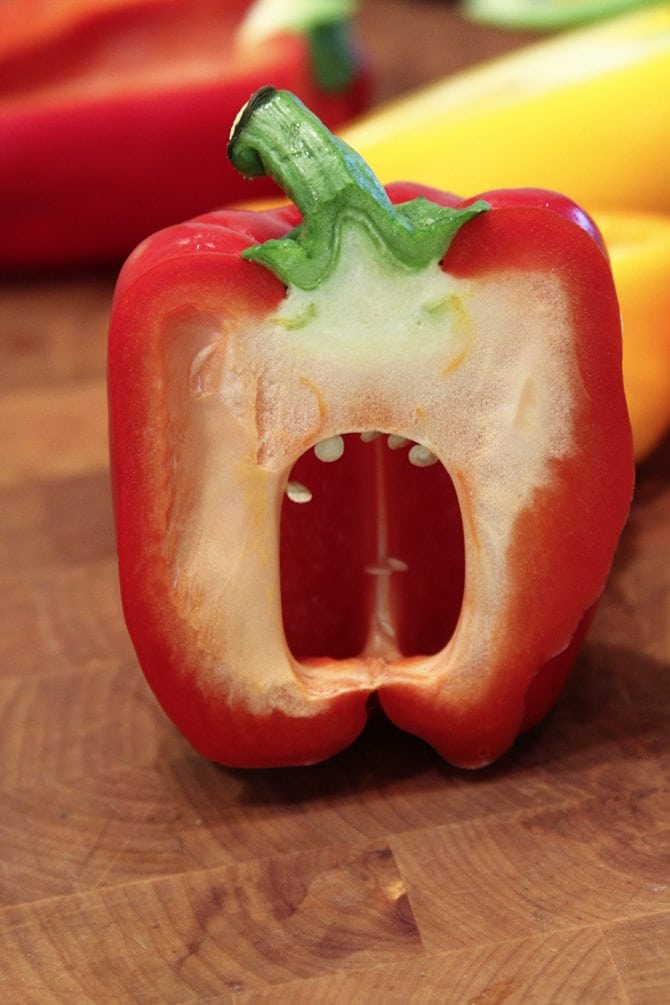 This one wasn’t happy about being cut  – so he started yelling at me.  See his face there?  🙂 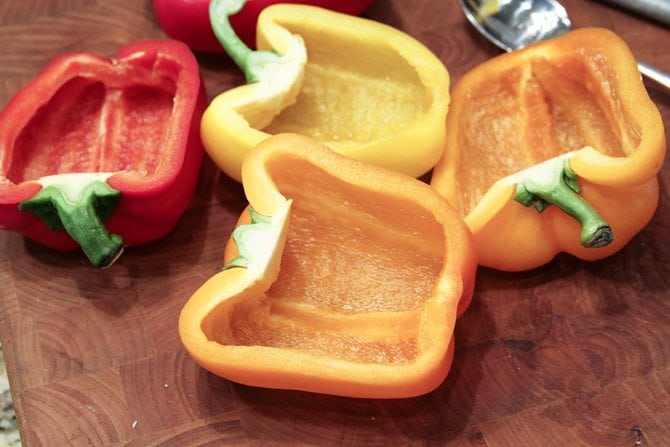 Next use a spoon to scoop out the seeds and membranes.  Spray a baking dish with a little nonstick cooking spray and place the peppers in the dish. 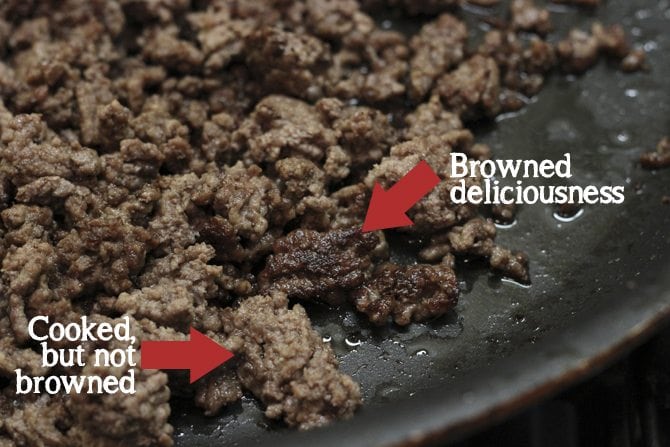 Next, brown your ground beef in a large skillet over medium heat.   Now, keep in mind here… I said brown the meat.  Don’t get cook it until all the pink is gone.  I see this all the time, when folks just cook it and don’t brown it.  Browning it ads more flavor.  It may take a few more minutes and you may have to increase the heat a bit, but it’s worth it.  Now BROWN that ground beef! 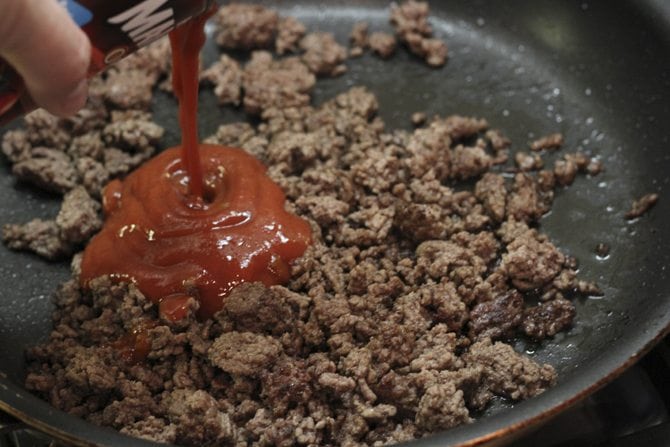 Add the sauce and stir until it is heated through. 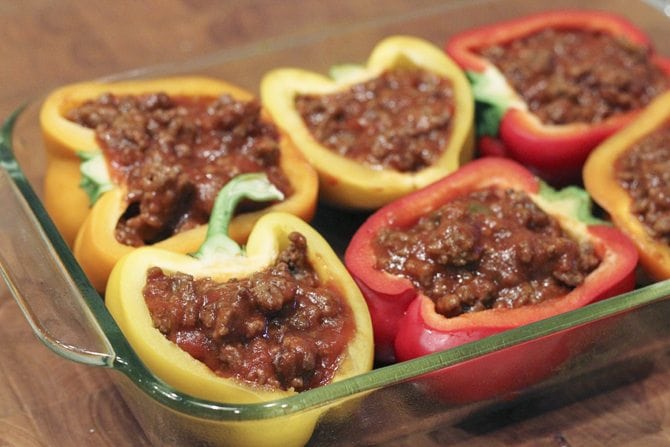 Spoon the meat mixture into the peppers and wrap the dish tightly with aluminum foil.  Bake for 25 to 30 minutes or until the peppers are tender to your liking.  Remove the dihs from the oven and take off the foil.  Sprinkle your desired amount of cheese on top and return to the oven until the cheese is melted.  These are great served alongside some rice or mashed potatoes. 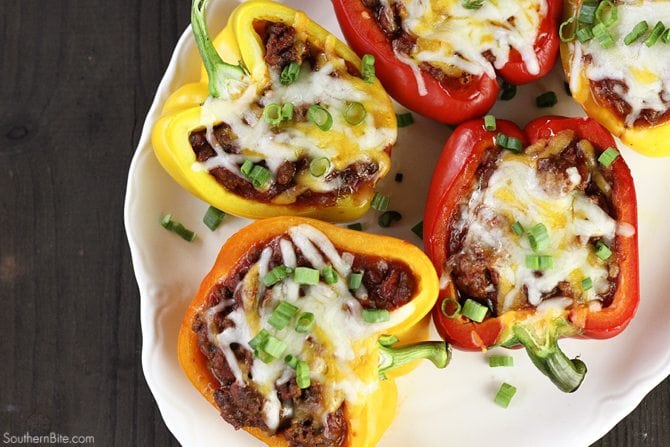 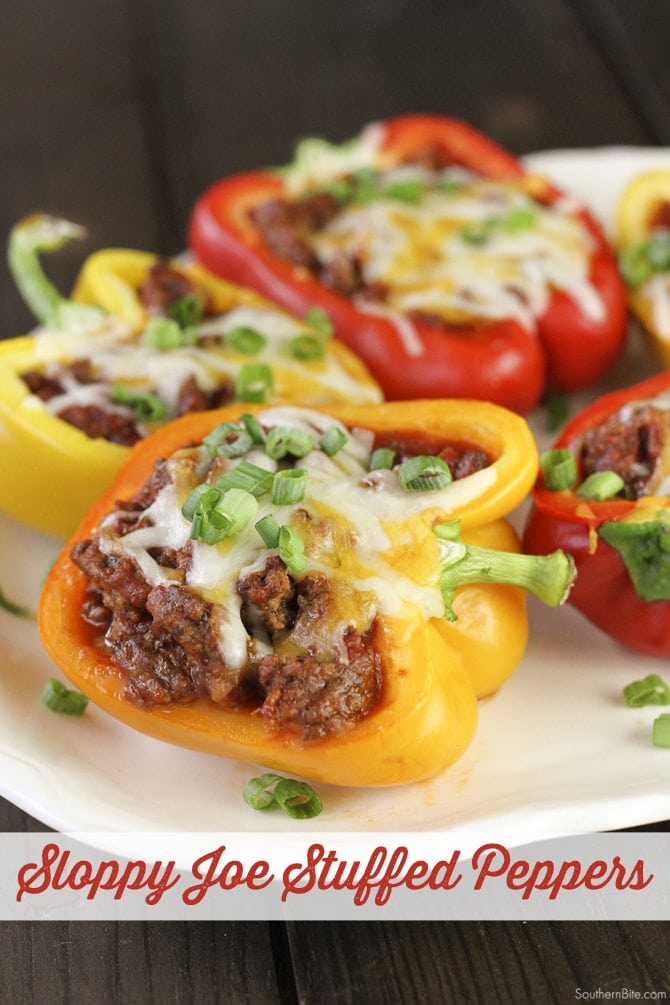 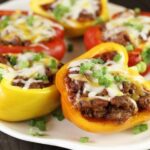 This makes a great freezer meal! Simply prepare up until the baking step then freeze.

Did you make my Sloppy Joe Stuffed Peppers?I'd love to see! Share on Instagram, tag @southernbite, and use the hashtag #southernbite!
Tag on Insta Leave a Rating