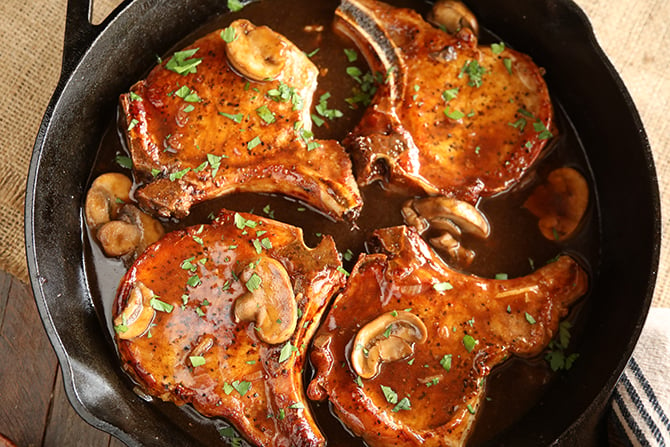 I often get asked about the best way to cook pork chops to keep them from drying out.  The truth of the matter is that it’s more about how long you cook them rather than how you cook them.  Food safety standards recommend cooking pork to an internal temperature of 145°F.  Doing that will ensure it’s safe to consume and still juicy!  But you shouldn’t just guess at it.  The only reliable way to do it is to test the meat using an instant read thermometer.  It’s something that I recommend everyone have in their kitchen and can be purchased rather affordably from places like Amazon.  This is the one I use in the test kitchen: ThermoPro TP18 (aff link) 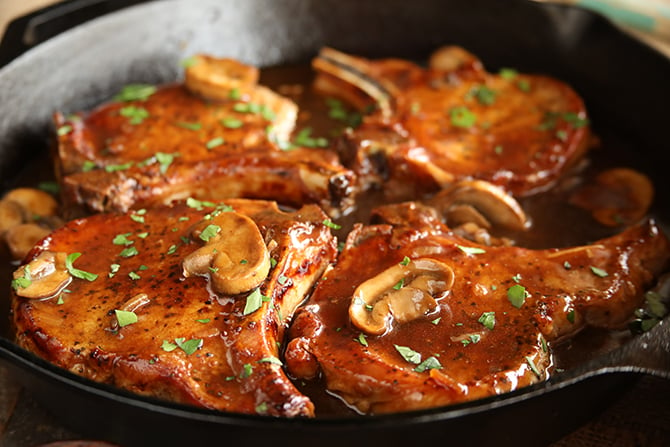 Now, not only so we want our chops to be juicy, but we want them to be flavorful too, right?  Well, I’ve got ya covered!  These Skillet Chops with French Onion Gravy are seriously the bomb.com.  Searing them in oil and butter adds great flavor.  Then we add mushrooms, beef broth, onion soup mix for a huge flavor blast, a little vinegar for bite, and we tighten it all up into a delicious gravy that you’ll be eating with a spoon.  Well, I do.  But don’t tell anyone. 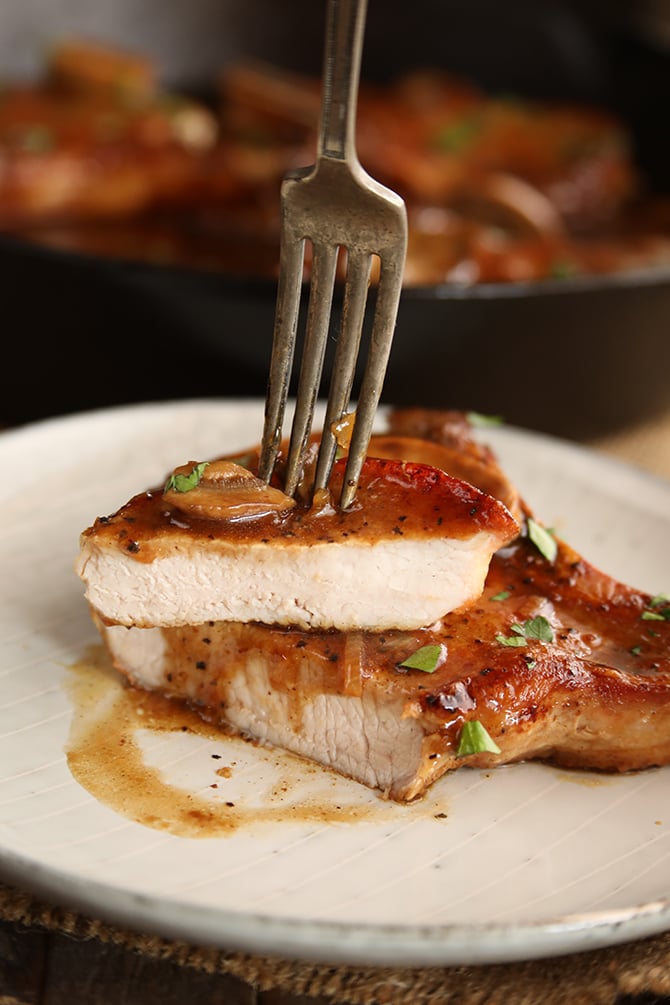 One thing to remember is that many things will continue to cook after they’ve been taken off the heat because of the residual heat in the meat.  It’s called carryover heat or carryover cooking.  Keeping that in mind, I use an instant read thermometer to measure the internal temp of my chops and pull them from the heat at about 140°F then tent them with foil.  The carry over heat combined with the foil, will get them to that 145°F mark without overcooking them. 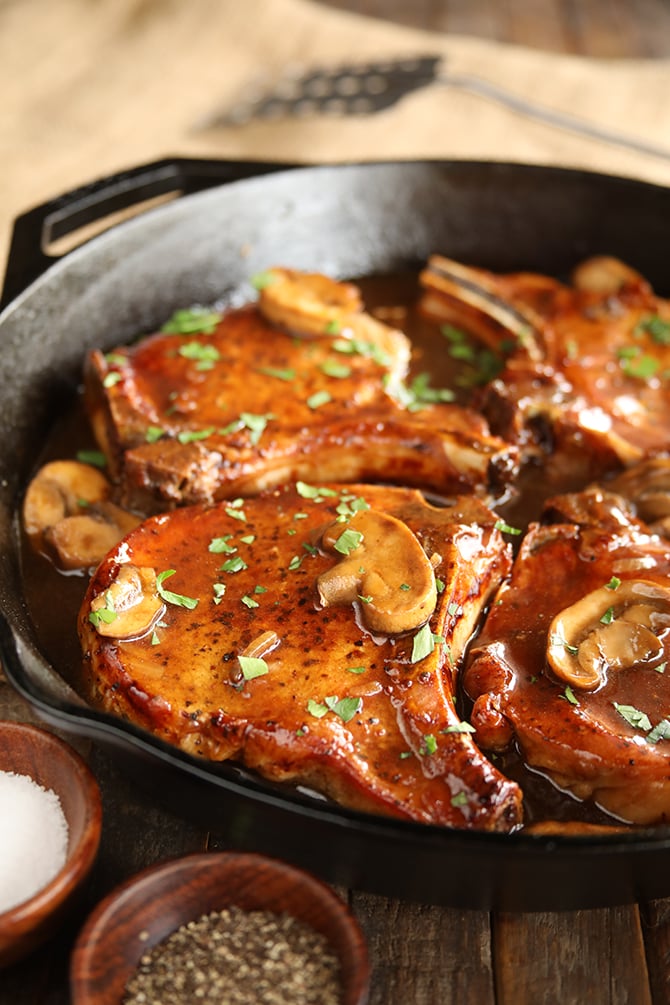 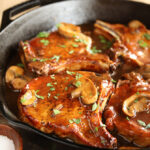 Print Pin Save
5 from 4 votes

You are welcome to use other cuts of pork - center cut, boneless chops, etc - you just may need to adjust the cooking time accordingly.  This is another place where having a thermometer comes in really handy!

Did you make my Skillet Chops with French Onion Gravy?I'd love to see! Share on Instagram, tag @southernbite, and use the hashtag #southernbite!
Tag on Insta Leave a Rating 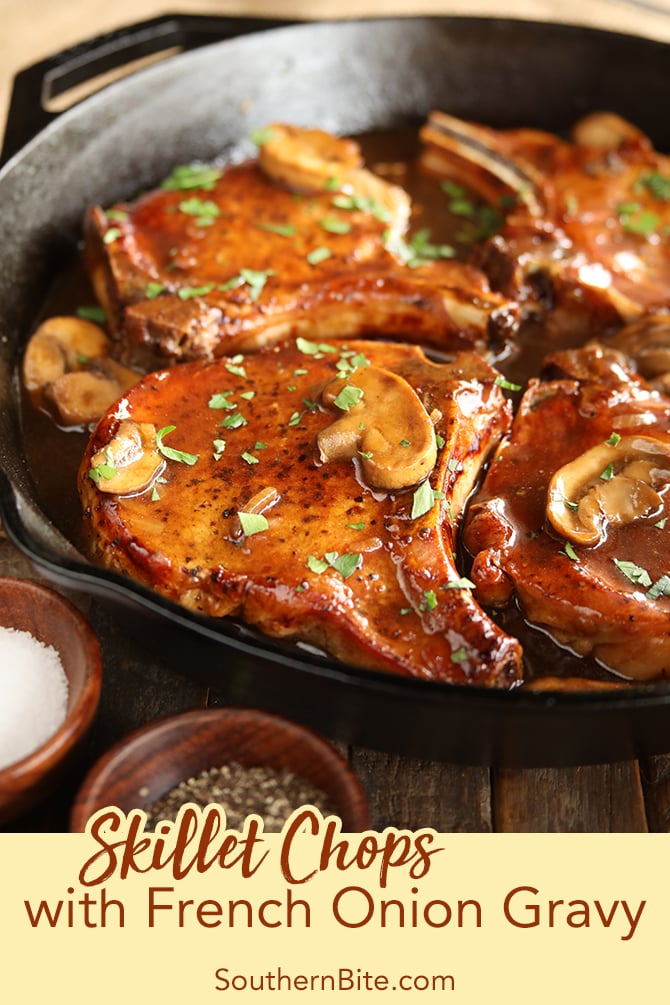