This recipe for Carrot Cranberry Salad swaps the classic raisins for dried cranberries and adds in pineapple, toasted pecans, and lemon for a bright, fresh, crunchy side your family will love!

Ok, I’ll admit it. I’m not a raisin fan. Actually, that’s putting it pretty mildly. I have a pretty strong disdain for the things. But I love carrots. So when someone asked me the other day if I liked carrot raisin salad, I said, “No, I don’t like raisins.” But the thought crossed my mind that I could just swap the raisins for dried cranberries. I’ve done that in other recipes like my grandmother’s Icebox Fruitcake, so why not here?

So, I took a classic carrot raisin salad, swapped those raisins out, tweaked the dressing a little, and added pineapple and toasted pecans to the mix to boot. The result is a crisp, fresh, crunchy salad with pops of sweetness and savoriness that I really love.

The biggest challenge in making this salad is grating the carrots. It’s a little time consuming and takes a little elbow grease if you’re using an old school box grater. Using the shredding attachment on your food processor or mixer will save you tons of time.

You could also use a 10-ounce bag of matchstick carrots to make the process even easier, but I found the texture pretty different and not quite what I wanted. Still, if you’re short on time or don’t have a way to shred them, the matchstick carrots will work.

A few things to note:

The recipe calls for about 6 medium-sized carrots. I found that to be roughly 1 pound of carrots. Once they’re grated, you’ll need 3 1/2 to 4 cups.

I chose to soak my cranberries in the drained pineapple juice and a little hot water (just enough to cover them) to get them to plump up, but it’s not a requirement.

Yes, you can use raisins in this recipe – regular or even golden raisins.

When it comes to those pecans, toasting them adds a deep savoriness and intensifies the flavor. Pop them in a 350° oven for about 5 minutes if they’re in pieces or 7 to 8 minutes if they’re halves. Just take them out once they become fragrant. You’ll also need to let them cool completely before adding them to the salad.

If you hate yourself, you can swap the mayo for greek yogurt. (Just kidding, of course – maybe. 😆)

When it comes to peeling those carrots, it’s a matter of preference. If they’re scrubbed well, there’s nothing wrong with eating the peel. Some folks say they have an “earthy” flavor, so you can certainly peel them if you like. 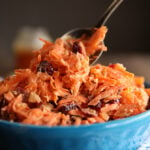 *You can swap the grated carrots for 1 (10-ounce) bag of matchstick carrots, if desired. The texture is a bit different, but it’s still delicious.

Did you make my Carrot Cranberry Salad?I’d love to see! Share on Instagram, tag @southernbite, and use the hashtag #southernbite!
Tag on Insta Leave a Rating