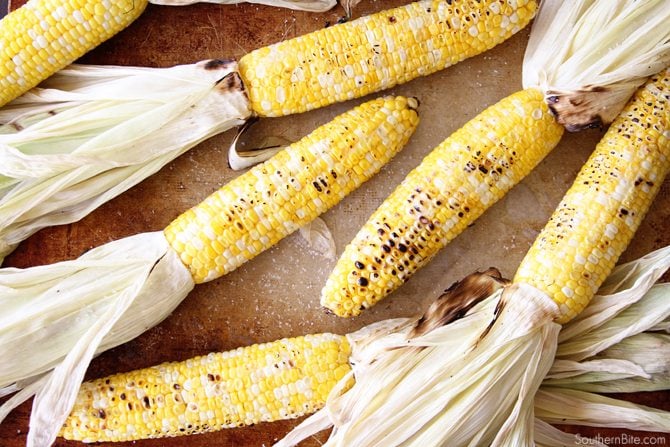 My Dad has some pretty strange eating habits.  And by strange, I don’t mean he eats weird things  – well, he does, but that’s not quite what I mean here.  He’s one of those guys that puts hot sauce on everything, he eats ketchup on his eggs, and he devours corn by the bushel.  As a kid, the end of every meal with corn on the cob found him at the table with a stack of corn and him plowing through.  He’d eat like 5 or 6 pieces.  And never with the meal, but after it.  He’s weird like that.

Of course this from the man who literally eats EVERYTHING but beets and cottage cheese.  There’s a great story about him eating yogurt one time.  Mom had told him there were several containers of yogurt that needed to be eaten in the fridge, so he took advantage of that for lunch one day.  She got home and was hurriedly putting dinner together when she couldn’t find the sour cream, but saw that the yogurt was still in the fridge.  Yep, you guessed it.  She checked the  trash can to find the sour cream container.  He had eaten a container of sour cream thinking it was yogurt.  When Mom said something to him about it he said, “Yeah, I was going to tell you to throw that other yogurt out because the one I had today had spoiled!”  We always joke with him that 40 years as a mechanic and being around all the chemicals has ruined his taste buds.  But anyway, back to corn…

He loves it.  And I do too.  Just maybe not quite as much as him.

Regardless, fresh corn is one of those things that takes a little time and effort.  The husking and de-silking alone deters most people from serving the fresh variety and going the frozen route.  But my grilled corn makes it pretty darn easy, if I do say so myself.  Grilling the unshucked corn for about 12 minutes makes it super easy to shuck and the silks just pull right off.  I also love the flavor of the corn when it’s cooked in the husks.  Let me show you how I do it… 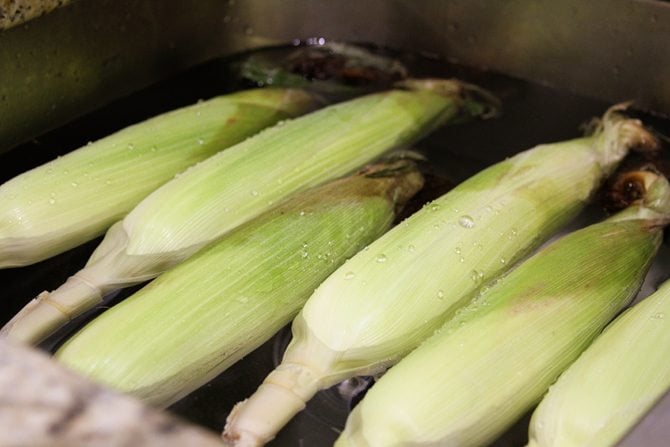 Start by filling a clean sink with cool water and soak the unshucked corn in the water for about 15 minutes.  This helps keep the husks from burning and adds some moisture because the first part of cooking it on the grill basically steams it right in the husks. 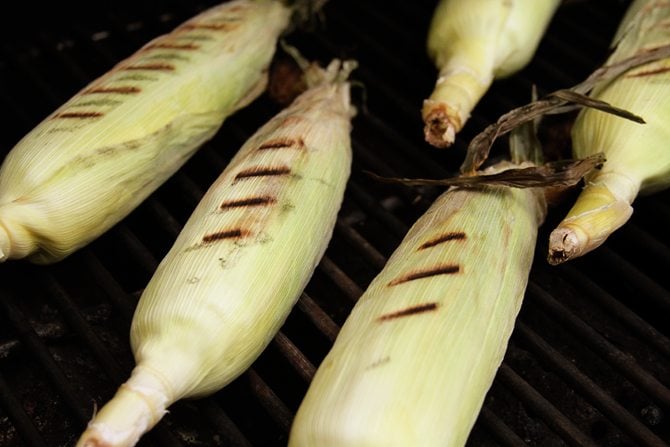 Preheat the gill to medium and place the corn on.  Cook for 6 minutes with the lid closed, then turn and cook it for an additional 6 minutes. 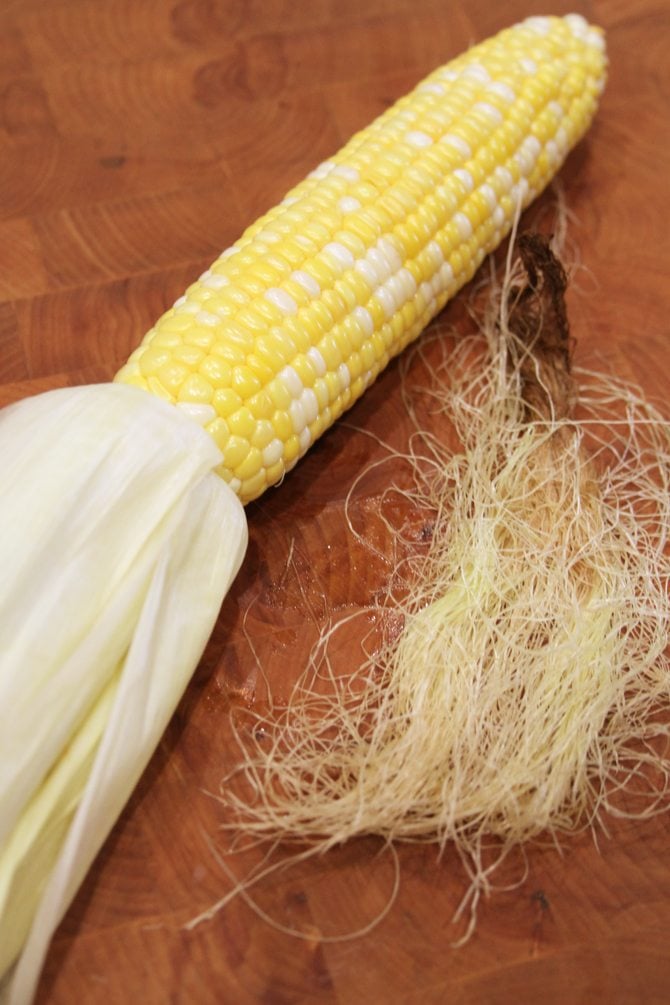 Remove the corn from the grill and allow it to cool enough to handle it.  Peel the husks back and pull the silks away.  This should be pretty easy.  If the silks prove to be troublesome, a soft-bristled brush will help.  You can pull the husks off completely, but I love leaving them on.  I think it looks really neat and it gives you a super convenient handle for eating!  The corn is basically done at this point, but I like to get a little char on it.  So I increase the grill temp to high and put the corn back on there for a few minutes on each side to add that grilled flavor.  Just be cautious to keep the husks away from the flame if you do leave them on because they’re dry at this point and will burn.  I usually just hang them over the outside edge of the grill.  Once that’s done, drizzle them with butter, sprinkle them with salt and get to work. 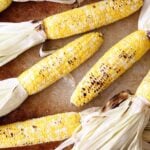 Did you make my Amazingly Easy Grilled Corn?I'd love to see! Share on Instagram, tag @southernbite, and use the hashtag #southernbite!
Tag on Insta Leave a Rating 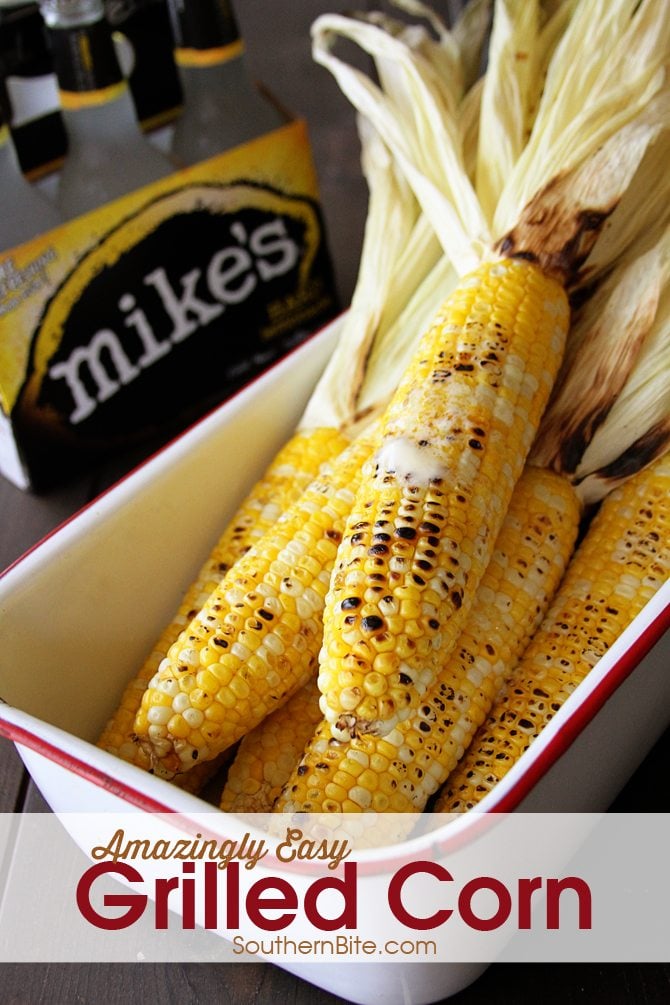 This post was brought to you by mike’s hard lemonade. I received compensation to write this post but all opinions expressed are my own.