This post is sponsored by my friends at Tony Chachere’s, but all opinions expressed are my own – just as always.  Thanks for supporting the brands that support my family and me.

Dried beans and peas are an affordable way to add tons of protein and fiber to your diet, but sometimes they can be a little boring. Well, these Spicy Creole Black-Eyed Peas certainly aren’t boring. I amp up the flavor with smoked pork, some diced tomatoes with green chilies, and a double dose of Tony Chachere’s by way of their Original Creole Seasoning and their bloody mary mix! These aren’t your average black-eyed peas, folks!!

Do I really need to soak my peas?

Conventional wisdom says that we should soak our dried peas and beans. Some say it helps to remove impurities, others say it makes them easier to digest, still others say you just do it because that’s the way you were taught.

However, modern science says it’s not really necessary. I wrote more about this over on this post.

The truth is, soaking your beans will make them cook faster – and maybe a little more evenly. But if you don’t have time to soak them or if you just don’t want to, you can still cook a fine pot of peas or beans without soaking them.

If you do decide to soak them, I recommend rinsing and sorting them and putting them in a bowl with enough water to cover generously. Cover the bowl and allow them to sit overnight. Then drain and rinse before proceeding with the recipe.

You can also go with the quick soak method. This involves placing the peas in a large pot, covering with water, and bringing to a boil. Then you’ll turn off the heat, cover, and allow them to rest for 1 hour. Then drain, rinse, and proceed with the recipe.

In my family, peas, beans, greens, and more were always seasoned with ham hocks. So what is a ham hock? Well, it’s about a 4 to 5-inch portion of the pork leg. They’re usually both salted and smoked and are normally pretty affordable. The collagen, fat, and skin add amazing flavor to the dishes I mentioned above. And it what’s I’ve called for in this recipe.

That said, ham hocks aren’t the only option. You could use smoked bacon, ham, a ham bone, smoked turkey legs, turkey wings, or even turkey necks. Smoked sausage is an option, too. You’ll just want to find a way to get that smoky flavor into this dish.

Is it really ok to add salt in the beginning?

Many folks were taught that salting beans or peas in the beginning of cooking will prevent them from cooking through or will make the skins tough. Well, there have been quite a few tests done that actually prove the opposite. In fact, it might also help to keep them in tact. Yep, we’re busting food myths up in here today!

The reality is that salting them up front adds great flavor. So adding the salt that’s already in our Tony Chachere’s Original Creole Seasoning when we add the peas is perfectly fine.

Now, some food scientists say that adding an acid (like tomatoes) to the pot could prevent the beans from softening. In this case, we’re adding canned tomatoes and tomato juice by way of the bloody mary mix. But in all my testing of this recipe, I never had a problem with that. I think that’s because there’s a lot of liquid from the broth that helps to balance out that acid and keeps it from being a problem. 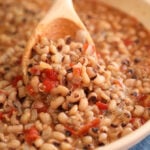 Did you make my Spicy Creole Black-Eyed Peas?I’d love to see! Share on Instagram, tag @southernbite, and use the hashtag #southernbite!
Tag on Insta Leave a Rating