This One-Pot Chicken Ratatouille recipe puts a twist on the classic French dish and turns it into a one pot meal. Served over pasta, rice, or in a bowl all by itself, this hearty dish is packed with vegetables and is incredibly flavorful.

Ratatouille. And no, I’m not talking about that cute little rat on the Disney movie. Granted, it IS one of my favorite animated Disney movies.

The truth is, the beautiful layered dish of thinly sliced veggies on the movie isn’t exactly ratatouille – at least not in the traditional sense. But, I’m getting ahead of myself…

A few weeks back, out of the blue, Jack asked if we could make ratatouille like from the movie. Now, he doesn’t often request specific dishes, much less ask to cook something together, so I jumped at the chance to get in the kitchen with my nearly 14-year-old.

We found this recipe online and set out to recreate the iconic dish one Sunday afternoon.

It was a labor of love, for sure. A mandoline helped with all the slicing, but it was still a pretty meticulous process. It also tasted amazing!

But, being the son of a Frenchman – my dad’s mother was French – I knew that this beautifully layered masterpiece (if I do say so myself) wasn’t traditional ratatouille.

My understanding is that ratatouille was a humble peasant dish made with coarsely chopped stewed vegetables. So, I set out to do a little research.

The dish in the movie seems to be based on a variation of ratatouille called confit byaldi. Wikipedia tells me that this dish was created in the 70s by French chef Michel Guérard and it became pretty popular thereafter.

Another source references the dish in the movie as tian.

I’m not sure which is correct – perhaps they both are – but I am sure of this… both of them take a lot more work than this version I’m sharing with y’all today.

Is this traditional ratatouille? Maybe not in its truest form. But it sure is delicious!

I start by sweating onions and peppers in olive oil, add in some garlic, then eggplant, zucchini, and yellow squash. Some chicken broth and canned tomatoes are next along with some dried basil and salt and pepper.

Once the vegetables are tender, I add in some shredded rotisserie chicken to turn this hearty stew into a main course the entire family loves.

Any kind of cooked, shredded chicken should work. I just love the convenience of rotisserie chicken, but you could certainly roast or poach some chicken and use that.

You could also buy some of that shredded cooked chicken you can find in the deli section of the grocery store more often now.

There’s no right or wrong way to cook it. It’s just a matter of preference.

Do I need to peel my eggplant?

The short answer is no. It is perfectly safe to eat the skin of an eggplant. In fact, much of the nutrition is in the peel. However, some eggplant skin can be tough and bitter. I suggest finding a small, young eggplant as those tend to have thinner and milder flavored skin. They also typically have fewer and smaller seeds. All that being said, if you’re in doubt, you can certainly peel it before chopping it up for this recipe. 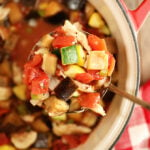 Did you make my One-Pot Chicken Ratatouille?I’d love to see! Share on Instagram, tag @southernbite, and use the hashtag #southernbite!
Tag on Insta Leave a Rating