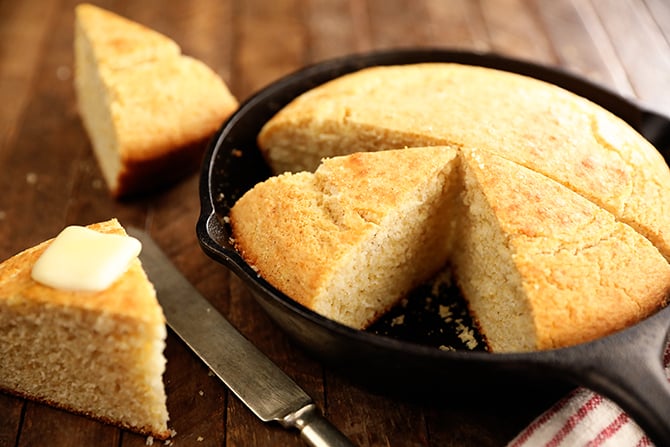 Elmer Wheeles was a farmer, a father to 9 younguns (that’s how we say young ones down here), a Baptist preacher, and could make a mean skillet of cornbread. He was also Heather’s great-grandfather. And while his sweet and feisty wife Kate was the main cook in the family, cornbread just kinda became his thing. 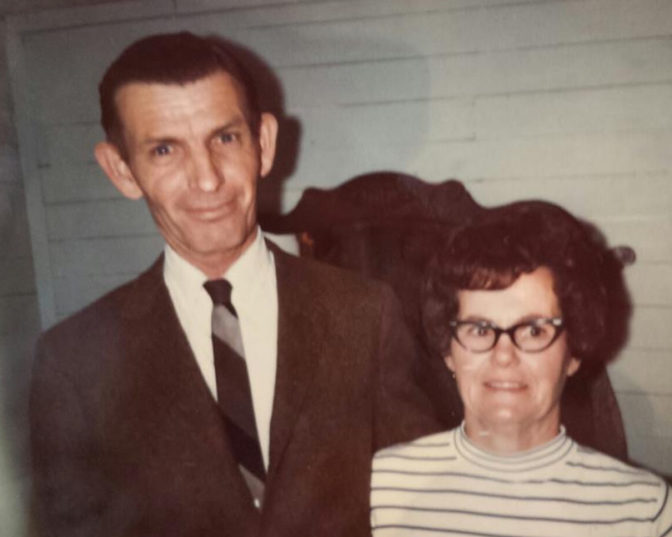 Now, I’m a big proponent of capturing family recipes while you can. In the south, old school cooks rarely use recipes, so I think it’s super important to take the time to sit down with your parents, grandparents, even great-grandparents when you can, and write down those old recipes – much like I did with my cookbook. Doing this not only captures those recipes, but also the memories associated with them for future generations.

In Heather’s family, it happened by way of her second cousin’s project in college. She created a small, 8-page booklet that contains 12 of Kate and Elmer’s most popular recipes. One of those recipes was for this very cornbread. 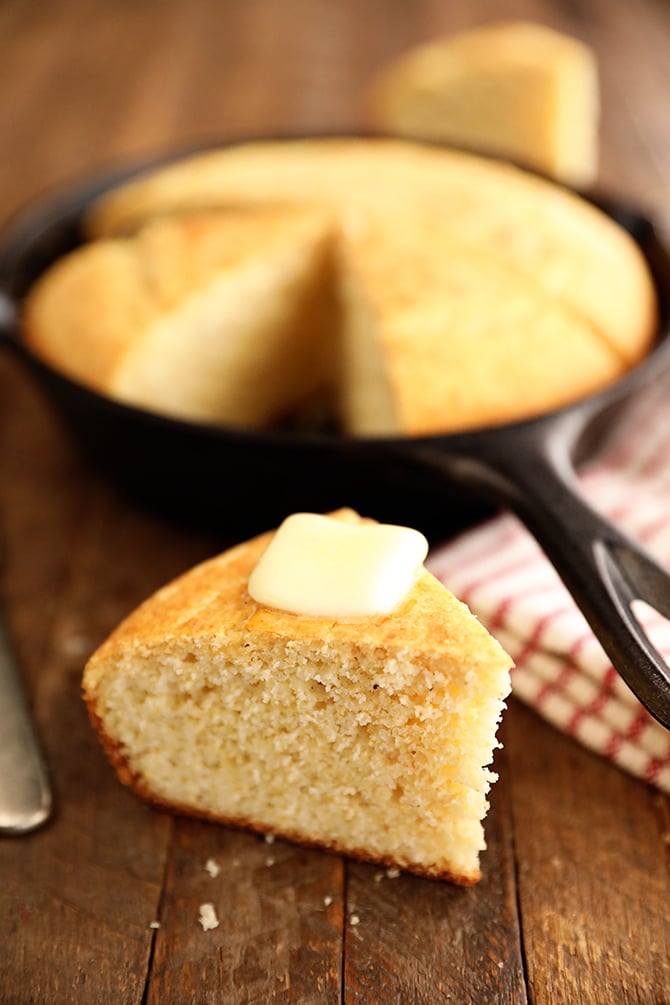 Now, admittedly, I did make a few tweaks to the recipe to make it easier to follow. For example, when it comes to the buttermilk and water measurements, Elmer’s recipe said, “Add just enough buttermilk to make it thick. Add water to make thin batter (like cake batter).” And while I absolutely LOVE how he described that, not everyone is so culinarily inclined and might just want to make some cornbread without knowing exactly what that means. So I tested it a few different ways and settled on this ratio of buttermilk to water. But feel free to follow Mr. Wheeles’ instructions if you wish.

And, we’re just going to head this issue off at the pass here… Yes, this recipe includes a measly tablespoon of sugar. And before some of y’all start with the whole “no real Southerner would put sugar in cornbread” deal, just know that it doesn’t get much more southern than Mellow Valley, Alabama – where they’re from. So, stop. I hear it all the time.

This is, by no means, a sweet cornbread. After tasting it with and without the sugar, I much prefer the version with it. It almost helps to enhance the corn flavor without being sweet at all. But the recipe works perfectly fine without it, if you so choose to leave it out. 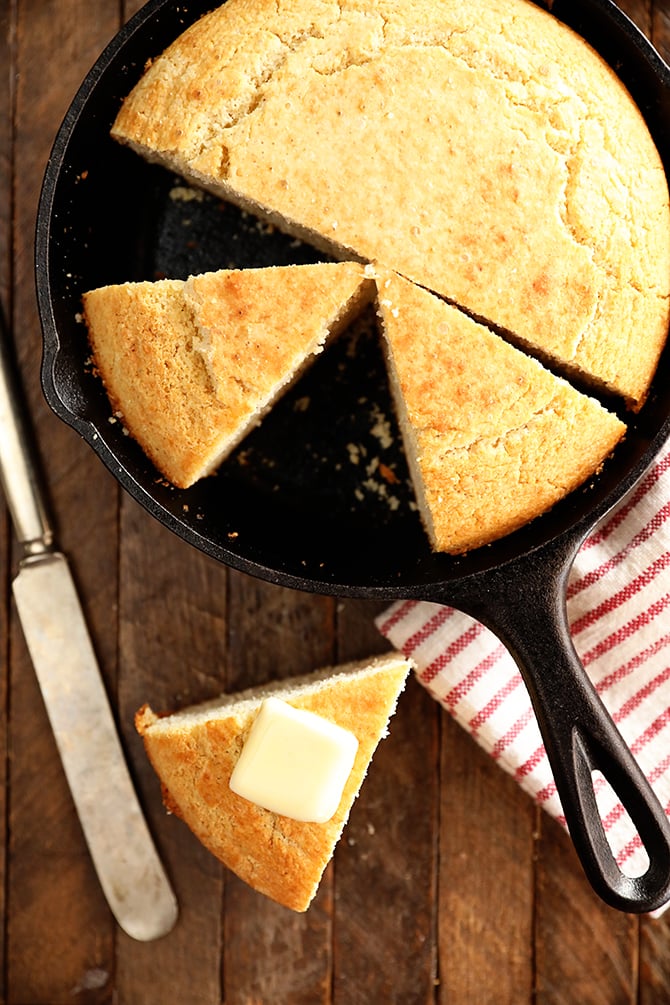 Tips for the BEST cornbread:

The real trick to getting the perfect, thick, dark brown crust on cornbread is a high oven temperature and preheating the skillet with oil. Traditionally, I’ll put a little oil or vegetable shortening in the skillet and place it in the oven while the oven preheats. The thing is that now many modern ovens preheat really quickly and that doesn’t give the skillet enough time to get super hot.  If you have one of those ovens, I’d recommend allowing the skillet to stay in the oven for about 5 minutes after it’s reached the target temp. Test the skillet by sprinkling a pinch of corn meal into the oil. If it sizzles, it’s ready. You can also preheat your skillet on the stovetop over medium high heat. When the oil starts shimmering and just gives off a touch of smoke, it’s ready.

Buttermilk is key to this recipe’s flavor and the acid in it reacts with the leavening to help give the cornbread lift. Low fat or fat free buttermilk is more traditional, but whole buttermilk will work as well. If you don’t have buttermilk, you can make a quick buttermilk substitute like this.

Like your cornbread dark golden brown on top, a few minutes under a low broiler will toast it right up. Just watch it carefully. 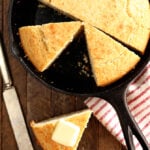 Did you make my Elmer's Cornbread?I'd love to see! Share on Instagram, tag @southernbite, and use the hashtag #southernbite!
Tag on Insta Leave a Rating 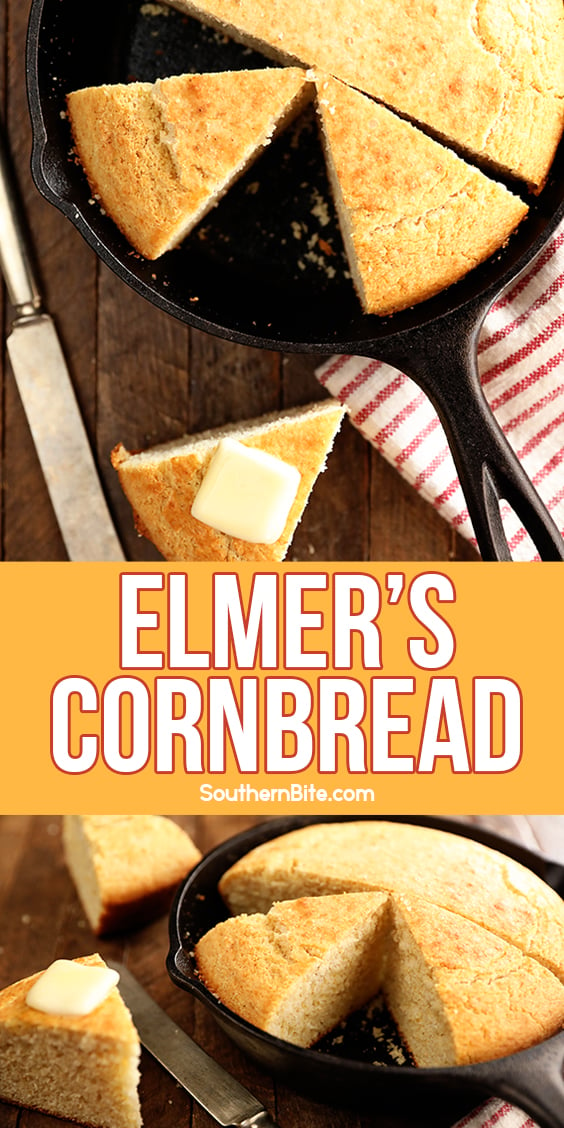