A few weeks back, I was doing a tv segment on my Ham, Egg, and Cheese Biscuit Wafflewiches when I had an idea. The wafflewiches take canned biscuit dough, fill it with ham, scrambled egg, and cheese and cook them in a waffle iron. They’re super delicious and a crazy easy breakfast.

Anyway, I had finished the segment and had a few biscuits left that I hadn’t cooked and wondered what would happen if I just cooked them in the waffle iron by themselves. I popped one in the iron, tossed it with a little cinnamon sugar when it came out, and my new Cinnamon Sugar Biscuit Waffles were born!

These warm, crispy waffles are the perfect thing for those busy weekday mornings. They only take about 5 minutes to make! (They make a pretty delicious post TV snack, too! 😁)

They’re great served all by themselves – which makes them a great on-the-go breakfast – or are delicious drizzled with a little syrup, too!

My wafflewiches call for the Pillsbury Grands! Original Flaky Layers biscuits, so that is what I had on hand the first time I made them. For the sake of testing though, I tried them with the Honey Butter and Sweet Hawaiian versions of the flaky layer biscuits. I tried the non-flaky biscuits, too. And in all honesty, I liked the original ones the best.

Don’t get me wrong, they all were delicious, but I felt like the original complemented the cinnamon sugar the best. But any of them will work – even the regular size biscuits. Essentially you just need some canned biscuits and a waffle iron. Just keep in mind that the cook time might change a little with different sized biscuits. I even saw chocolate chip and blueberry versions of their biscuits that I think would be delicious, too! 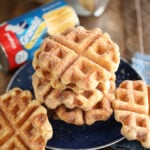 Did you make my Cinnamon Sugar Biscuit Waffles?I’d love to see! Share on Instagram, tag @southernbite, and use the hashtag #southernbite!
Tag on Insta Leave a Rating