This old fashioned Vanilla Wafer Cake is the vintage recipe you remember from your childhood. Made with crushed Nilla Wafers cookies, coconut, and pecans, this dense, rich, Bundt cake is packed full of great flavor.

Yes, it sounds a bit different, but often times, different can be so, so good. And that’s certainly the case with this cake!

We swap traditional flour for crushed vanilla wafer cookies and the result is absolutely delicious. And yes, technically, there is flour in the cake as the cookies are made with flour, but you get my point.

This cake has been on the blog for years, but often gets overlooked, so I decided to give the recipe a little makeover, shoot some new images, and give it its own post.

While I can trace the history back to the 70s, I can’t find much beyond that. I’m hoping some of y’all might be able to help shine a little light on its back story. Be sure to share your memories of Vanilla Wafer Cake in the comments below!

A few things to note about this recipe:

I usually find frozen coconut in the freezer section of my grocery store right next to the frozen fruit.

If you can’t find frozen coconut, you can use 1 1/2 to 2 cups of the sweetened coconut flakes. It’s still delicious, but the texture is a bit different and the cake will be a touch sweeter.

When it comes time to crush those vanilla wafer, I typically toss them in my food processor, but a gallon zip-top bag and rolling pin works, too. If going that route, I suggest doing about half the box at a time to make sure you get them all crushed well.

This cake stores well on the counter for 4 to 5 days in an airtight container and freezes really well when tightly wrapped.

While I’ve seen other recipes that suggestion you can leave out the coconut or pecans, I don’t recommend that. I think they both are a big part of the flavor and texture of this cake, so I don’t think omitting them is a great idea. With that being said, I suppose you could swap the pecans for walnuts without much changing. If coconut and pecans aren’t you thing, maybe my Crusty Cream Cheese Pound Cake or my Caramel Pound Cake might be closer to what you’re looking for. 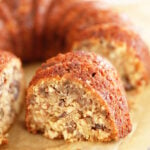 * This recipe specifically calls for using frozen shredded coconut. It’s usually found in the freezer section near the frozen fruit. It is less sweet than shelf-stable sweetened coconut flakes and has a very different texture. If you can’t find the frozen variety, you can use 1 1/2 to 2 cups of the sweetened coconut flakes, but the cake will be sweeter and will have a different texture.

Did you make my Vanilla Wafer Cake?I’d love to see! Share on Instagram, tag @southernbite, and use the hashtag #southernbite!
Tag on Insta Leave a Rating