There are recipe posts where I work really hard to educate. I share tips and tricks to help ensure the recipe turns out perfectly for you. I work to explain the science behind a recipe because I think knowing “why” things work makes us all better cooks. Well, folks… this ain’t one of those posts.

This post is all about the looks, people. I mean, will ya just LOOK at those cinnamon rolls! If that’s not ooey, gooey, caramel-y perfection, I’m just not sure what is.

These cinnamon rolls are literally swimming in a decadent caramel sauce and perched on the top of each one is an abundant collection of perfectly toasted pecans. (Yeah, that description was even a little far for me. 😂)

But we’re gonna gild that lily folks. Yes we are! Now we’re gonna drizzle them with vanilla icing, too!

Ok, admittedly, I’m going over the top here, but did y’all see these things?? Like really SEE them?

Well, guess what!?!? They’re made with canned cinnamon rolls. {Queue the pearl clutch!}

I’m a big fan of the whole idea of semi-homemade recipes. It’s about taking a good convenience product and making it even better.

In this case, we amp up those canned cinnamon rolls with a super simple, but crazy delicious, homemade caramel sauce and toasted pecans.

And my family goes absolutely bananas over these things! If you love an ooey, gooey cinnamon roll, these are the ones for you!

Truth is, you may have seen these on the blog before in another iteration as my Sticky Pecan Cinnamon Buns, but the recipe didn’t always turn out perfect for folks as the caramel sauce in that version can over cook sometimes and crystalize.

Now, I could go into the science of it and explain the differences between sucrose and glucose and explain invert sugars, but I won’t bore you with it. The short answer is corn syrup is glucose and prevents the crystallization of the sucrose (regular table sugar). Oh, I’m doing it anyway. Dang it. Corn syrup. Corn syrup is the answer.

And, no. The corn syrup in your pantry isn’t the high fructose corn syrup you hear about all the time.

And y’all, these couldn’t be easier. You literally just stir the caramel ingredients together, bring it to a boil, pour it into the prepared baking dish, sprinkle with pecans, top with the canned cinnamon rolls, and bake.

The only real skill required here is flipping them out onto a serving platter.

Now, you can certainly serve them right from the baking dish, but they’ll be upside down.

If you flip them out, here are a few tips:

Allow the dish to cool for about 5 minutes before flipping. It will make handling the dish a little easier – though it will still be HOT!

I suggest using a serving platter that is a little bit bigger than the baking dish, draping a large towel over the entire rig, grasping both the platter and the dish (covered by the towel), and flipping it over. The towel will protect you from the heat of the dish and will work to catch any stray caramel because it will still be pretty hot. And if you’ve ever had a caramel or hot sugar burn, you know it isn’t pleasant.

Now, y’all go make these and report back. I can’t wait to hear how much you love them! 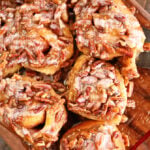 Did you make my Shortcut Caramel Pecan Cinnamon Rolls?I’d love to see! Share on Instagram, tag @southernbite, and use the hashtag #southernbite!
Tag on Insta Leave a Rating