I’m a big fan of any kind of chess pie. My Buttermilk, Peach Chess, and Eggnog Chess Pies are all delicious winners in my book.  But I will admit that Chocolate Chess Pie is probably my favorite.  It just has the most perfect, creamy, chocolatey filling and I just love the crusty top that forms as it bakes.

The best part, though, is how dang easy it is to make.  You literally mix all the ingredients together and pour them into a prepared pie crust.

Now, when it comes to the crust, I like to use the pre-made, rolled-up pie crusts that you find in the refrigerated section of the grocery store over by the canned biscuits and cinnamon rolls.  It allows me to use my own pie plate but doesn’t have me making a homemade crust – which I appreciate.  That said, the preformed frozen crusts work just as well.  And all you overachievers can make a crust from scratch if you have some extra time.  🙂

Just note that some of the store bought crusts in the aluminum pans can be a little flimsy.  Put the crust on a small baking pan before filling it and just pop it in the oven on the pan to make it easier.

Regardless of what kind of crust you bake it in, this pie is destined to be a new family favorite.  My folks just love it – and always have.  It’s one of those classic southern recipes that has been around for ages.  In fact, the original recipe that I have made two pies – like many old pie recipes do – so I just cut everything in half to make one.  As a result, this doubles beautifully if you need two pies.  🙂  And, I mean, who DOESN’T need two pies?  Ha!  Y’all enjoy! 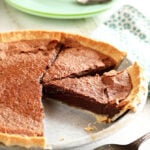 If you find the pie too liquidy after cooling, simply place it in the fridge for a few hours and it will set right up.   Some store-bought crusts have pretty flimsy aluminum pans.  Put the empty pie shell on a baking pan before filling it and pop it in the oven on the pan to make transferring it easier.

Did you make my Chocolate Chess Pie?I’d love to see! Share on Instagram, tag @southernbite, and use the hashtag #southernbite!
Tag on Insta Leave a Rating