I’ve read a lot lately about how folks are getting annoyed with all the stories on food blogs – saying that they just want to get to the recipes. Well, folks, if that’s the reason you’re here, you can click to the recipe right here:  Jump to Recipe.

For those of you who aren’t here just for the recipes, this is one of those stories. And it’s long and probably a little sad. And it’s taken me a week to get to the point to be able to write it. So, if you take the time to read it, I’d sure appreciate it. Writing is therapeutic for me and hopefully you’ll get a little something out of it too. If you’ve ever loved a pet, this will make sense to you.  This isn’t going to be easy.  Y’all bear with me… 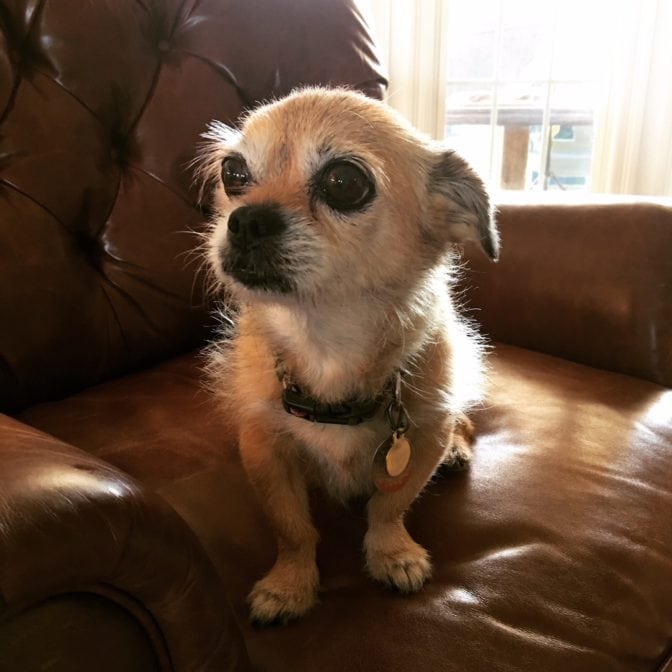 Last Tuesday was quite possibly the hardest day of my adult life.

In 2004, I was a 23 year old kid with a brand new job, a house, and was just getting my life started. But I was lonely. But that all changed when I walked into a pet store with one of my coworkers. Out front was a lady and a little girl with a box of puppies. Immediately it seemed like the perfect solution for my loneliness. Peering into the box, I found two puppies left. A beautiful tan and white one and another black and brown one that just wasn’t nearly as cute. I instantly thought the tan and white one was perfect, but the lady said that she was already spoken for. Having my heart set on taking a puppy home, I took the black and brown puppy reluctantly. I named her Sadie.

She was just what I needed. She met me at the door every evening with a wagging tail. We did everything together. She became my best friend.

The ugly little puppy grew into a precious dog. She was small, but had a big personality. I loved that dog like I never knew I could love something.

As life happened, she was always there.

She was guarded when Heather and I started dating but eventually warmed up to her. We got married and she and Heather’s dog Bailey hated one another. But they eventually connected and became inseparable.

We brought Jack home from the hospital and she took to him immediately. The first night he was home, she slept under his crib. She was very protective and was instantly beside him any time he would cry. We often called Jack her baby. She loved that boy. 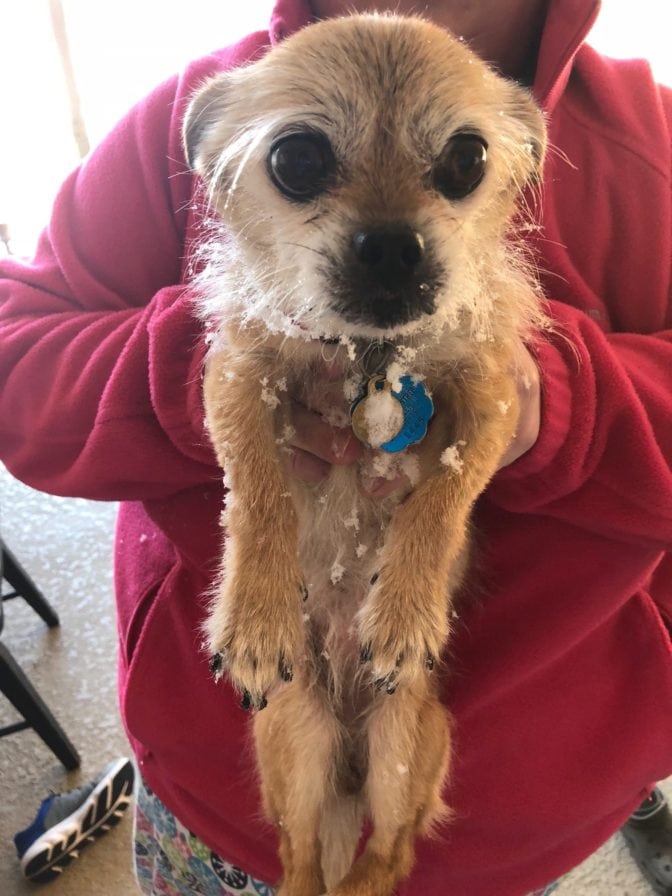 Two years ago, during their annual check up at the vet, we expected to get bad news about Bailey. She was a bit older and we felt like her health was starting to decline. That wasn’t the news we got. Sadie was in renal failure. I left that day devastated. I had no idea I’d actually get two more years with my sweet girl.

At the most recent vet visit, the doctor said Sadie’s levels were near perfect. We were able to control most of her problems with diet which was such a blessing.

But the last few weeks have been tough. She started losing weight fast. She slept a lot of the time. She barely ate. I called the vet. They told me she was probably in the final stages of renal failure. But even knowing that and seeing the gradual decline in no way prepared me for last Tuesday.

Two weeks ago, seeing her constantly tremble, it broke my heart. Each evening I would make her some rice and broth and add a vitamin and iron supplement the vet gave her in the hopes it would help. It didn’t. I couldn’t bring myself to do it, so I had Heather call the vet and make the appointment. THE APPOINTMENT.  Tuesday afternoon at 3:00. It was a death sentence of my girl.

Tuesday I stayed home. It was a great day for her. She met me by my bedside that morning. She wagged her tail. She hadn’t done that in weeks. We snuggled on the couch. We shared popcorn – her favorite thing. She was happy. She ran outside. She seemed so much better. The feeling of dread faded. There’s was no way the vet was going to tell me I needed to put her down today. This dog wasn’t ready yet.

At 2:45 I grabbed her blanket and loaded her up in the car. She didn’t sit over in the passenger seat like she had been, she climbed over in my lap and stuck her face to the window. We took the long way through town. She wagged her tail more.

At the vet they did blood work. When the vet came back in, I knew it wasn’t good news. He’s been our vet since I was a child; he’s just like an old family friend. He explained that her kidneys were gone. He said that it was just a matter of time. I told him she was doing so well today. He explained that often in this situation, there would be good days and bad days. I knew that was true from the last few weeks. He was right. It was just a matter of time. I couldn’t let my girl suffer.

Watching her take her last breaths was the hardest thing I’ve ever experienced. I rubbed the spot right between her eyes down the length of her nose… it was our thing. I closed her eyes. I sobbed. The vet hugged me. I took her collar off. I got in the car and just drove.

I’m fortunate to have had very little experience with death in my life, so this was uncharted territory. Not only did she die, but I was the reason. I made a decision to end her life. The immediate guilt was nearly unbearable.

The first few days were pretty tough. Every single thing reminded me of her and brought me to tears. I got in my car to find her distinctly colored two-tone hair on my steering wheel. Each morning, I would find her favorite bed… empty. Bailey is just lost. She’s nearly blind now and just keeps wandering the house looking for her. It’s emotionally crushing.

But the one thing that a week has taught me is that I made the right decision. She’s no longer suffering.  She didn’t deserve that.  The only pther option we had was to start blood transfusions and there’s no reason to put a nearly 14 year old dog through that. It was just prolonging the inevitable. 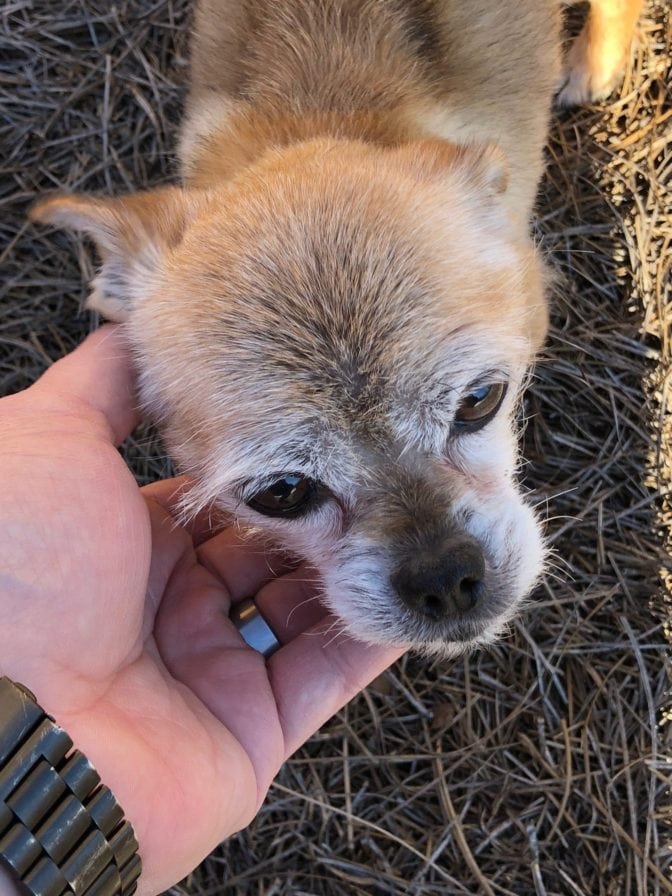 You see, what I did – making the decision – is part of the deal. When we agree to accept the love of a dog, we agree to make the decision to end their pain when the time comes. Our dogs do an amazing job of taking our heartache and pain away and we have to do the same for them. So many times she consoled and comforted me and my last expression of love was to do the same for her. In the days following her death a dear friend told me that having a pet is both the best and worst thing we can do for our hearts. And while the pain is still immense, I know it will fade and I’ll be left with the memories of the happy times. I won’t remember what this feels like. I will remember her opening presents on Christmas morning with her little paws and teeth and shredding the paper into a thousand pieces. I will remember her licking Jack on the head the first day we brought him home. And I will remember her leading Bailey around the house when she started losing her sight. I will remember her her dancing around in excitement when she’d see me opening a new chew toy for her. I will remember my sweet girl fondly.  I will remember the good times. But right now… right now, it just hurts.

There’s no great transition – no way to connect the story with the recipe.  Except to say that in times of sadness, comfort foods seem to help – even if just a little bit.  My mom’s Stuffed Cabbage is one of my favorite comfort foods, so it only makes sense to share this Instant Pot Soup version of her classic recipe. 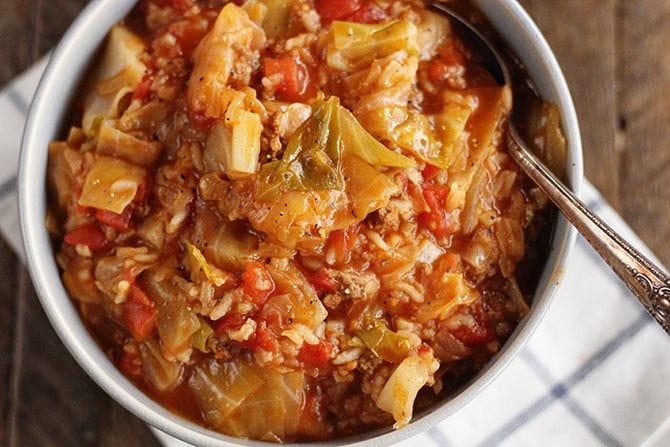 I’ll admit to being a little late to the Instant Pot craze, but will say that I’ve used an electric pressure cooker for years.  I just love how easy it makes hard cooking a bunch of eggs and they’re so easy to peel!

That said, when my mom bought one she dropped it off by the test kitchen for me to experiment with one day.  I was really wanting some of my Stuffed Cabbage Soup and thought, “Hey, that should work in the Instant Pot!”  And boy did it ever!?!  It was amazing and had such a rich delicious flavor! 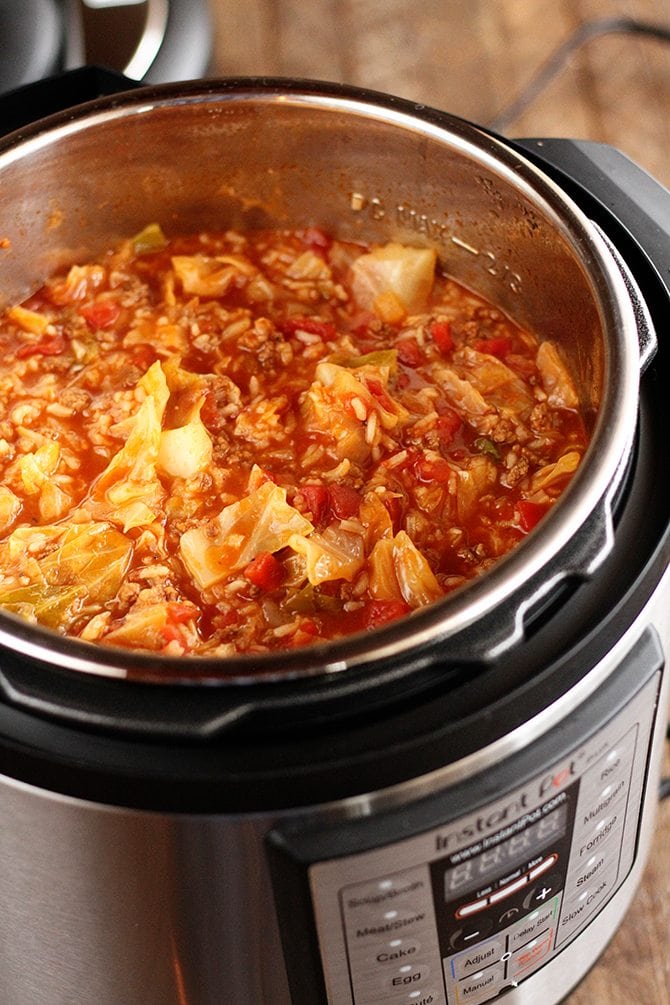 This recipe was already pretty easy, but to be able to get so much flavor out of the ingredients in such a short time, this is really a game changer. 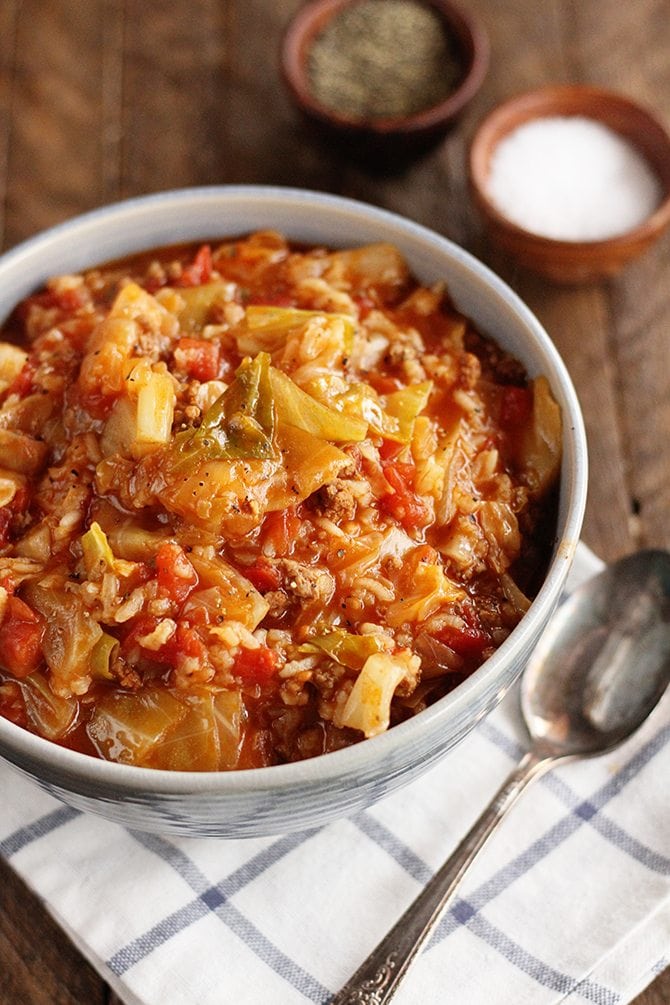 The end product really ends up closer to stew than a soup, but “Cabbage Roll Stew” just doesn’t have quite the same ring.  🙂  Regardless, it’s delicious! 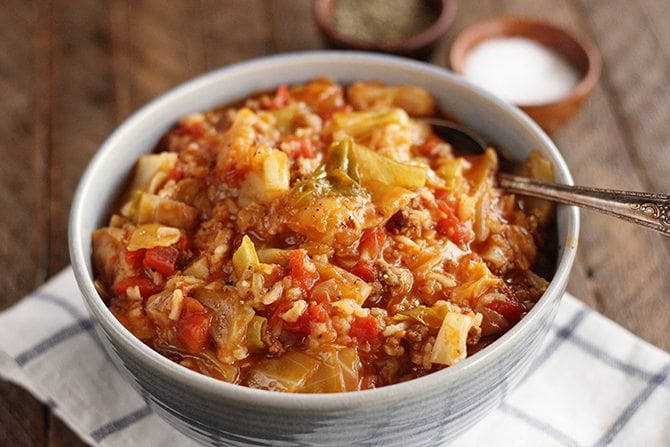 Did you get an Instant Pot recently?  Where are you finding your favorite recipes?  I’d love to hear!

Don’t have an Instant Pot?  Check out my stovetop version of this recipe! 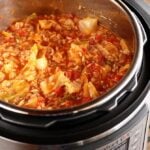 Did you make my Instant Pot Stuffed Cabbage Soup?I'd love to see! Share on Instagram, tag @southernbite, and use the hashtag #southernbite!
Tag on Insta Leave a Rating