After the crazy success of that newer recipe, I decided to revisit the ol’ Chicken Spaghetti Remix and give it a little facelift by shooting some new images of it and updating the recipe a bit, too.

The truth is, I’ve been making chicken spaghetti for as long as I can remember. From the old school original, to my Crock Pot Chicken Spaghetti, to this quick and easy stovetop version, we all just love it at our house.

This version has all the classic flavor with Velveeta cheese, Ro*Tel tomatoes, and cream of mushroom soup, but takes advantage of a precooked shredded chicken (I normally use a rotisserie chicken) and it all cooks right on the stovetop – no baking! This makes it a bit quicker and a lot easier.

On all of the various versions of this recipe on the site, I often get asked about swapping out the Velveeta cheese. Here’s the deal, there’s just nothing quite like this processed cheese. It melts beautifully and has a tangy flavor that’s hard to replicate. Should you make it a regular part of your diet? Probably not. But you probably shouldn’t make chocolate cake a regular part of your diet either. Everything in moderation, right?!? Everything including moderation. ????

When it comes to the Ro*Tel, it’s really just canned tomatoes with chilis. You can use another brand – even generic. A lot of the big canners have variations of this. And you can often find it with varying levels of heat. I typically use the mild version but even saw a “milder” version at the store the other day if you want to ensure there’s no heat in this dish at all.

And yes, I know it’s called chicken spaghetti and I used penne pasta. You can 100% use spaghetti (or any other pasta for that matter), but I find that the thick sauce often makes cooked spaghetti break apart when stirring so I used a heartier pasta.

Speaking of the thick sauce, sometimes this stovetop version can be a little too thick, so adding some chicken broth or even milk will help to thin it out to your liking. Just stir it in right at the end. And the longer this sits and cools, the thicker it gets, so adding some when reheating it is probably a good idea, too.

Regardless, this dish is perfect for those busy weeknights when you want some of that stick-to-your-ribs kind of comfort food. It’s ooey, gooey, cheesy perfection!

Serve this alongside an easy salad and you’ve got supper covered, my friend! Y’all enjoy! 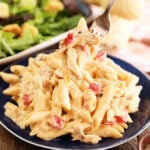 Did you make my Easy Stovetop Chicken Spaghetti?I’d love to see! Share on Instagram, tag @southernbite, and use the hashtag #southernbite!
Tag on Insta Leave a Rating
https://www.pinterest.com/pin/8092474321594135/