Peanut Butter Balls are another classic confection that we make every Christmas. They’re a little more work than some of the other things we make, but they’re totally worth the effort.

There’s just something about the peanut butter and chocolate combo, though, right? I’ve never been shy about professing my love for it and I’m not shy about expressing my love for these things either. They’re just so good. And apparently Jack has developed the same love, because I’m constantly finding him in the kitchen stealing a few. I just wish I had that kid’s metabolism!

While I’ve seen some recipes call for you to mix the peanut butter mixture together with a mixer, I find that it often adds too much air into the mixture. That creates a great texture to eat, but the lighter balls are really hard to get coated in chocolate because they’re so soft.

I typically just use a thick handled wooden spoon and then get in there with clean or gloved hands to get everything well combined.

When it comes time to coat these in chocolate, I use almond bark or the candy coating, but not the candy coating wafers. I follow the instructions on the package for melting the chocolate and then coat them with two forks – being sure to tap the excess chocolate off by tapping the fork on the edge of the bowl.

To make the process a little easier, I make a double boiler of sorts by putting a bowl with the melted chocolate in it inside my slow cooker crock filled with warm water set to warm. It helps to keep the chocolate melted as it takes a little while to get the balls coated. You can see an old picture of my contraption over on my post for Martha Washington Balls. 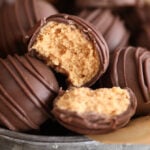 Did you make my Peanut Butter Balls?I’d love to see! Share on Instagram, tag @southernbite, and use the hashtag #southernbite!
Tag on Insta Leave a Rating