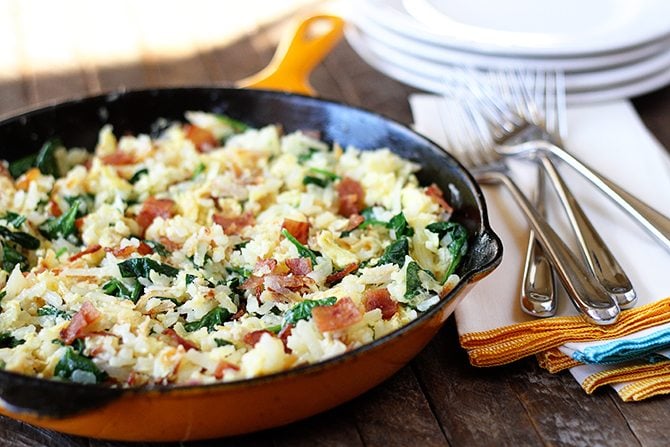 I’m not one for making New Year’s resolutions, but I’m certainly not oblivious to the fact that I could lose a few pounds.  So I’m doing my best to reduce portion sizes and make smart choices.  That said, there are some things that I just can’t do without.  Bacon is one of those things.  But I bet y’all already figured that out.

So when my friends at Simply Potatoes® asked me to use al fresco Chicken Bacon in a recipe, I honestly wasn’t really excited.  I mean, I get that it has 70% less fat than pork bacon and all, but every attempt I’ve made to enjoy non-pork bacon over the years has failed miserably.  So, the other day I pulled out one of the boxes of bacon to get an idea of what I was in for.  It’s fully cooked so it only needs a little time in the microwave or about 45 seconds in a hot pan.  I opted for the pan method.  Y’all, it literally blew my mind.  This stuff is amazingly delicious and tastes absolutely nothing like my non-bacon bacon attempts in the past.  It’s smoky, crispy, and salty – just like bacon.  Sure, the texture isn’t exactly the same, but considering how much better it is for you, it’s totally worth it.

After trying it, I decided to work it into a breakfast skillet that I cook every now and then for the fam jam.  It’s the perfect vehicle for the chicken bacon and using Simply Potatoes Shredded Hash Browns makes it a cinch to put together since there’s no peeling or shredding to do.  And they’re great because they’re made from fresh, never frozen potatoes. 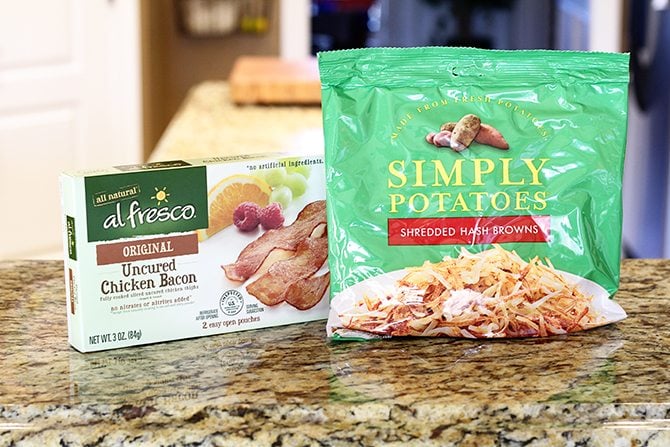 Start by heating a large skillet over medium heat. 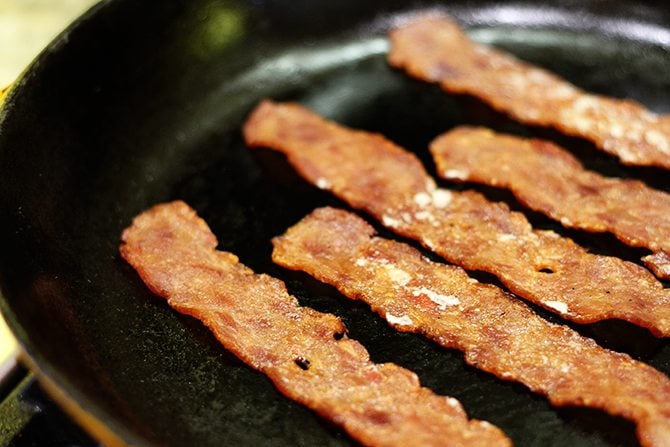 Add the bacon to the skillet and cook it for about 45 seconds.  Then remove it, cool, and chop it. 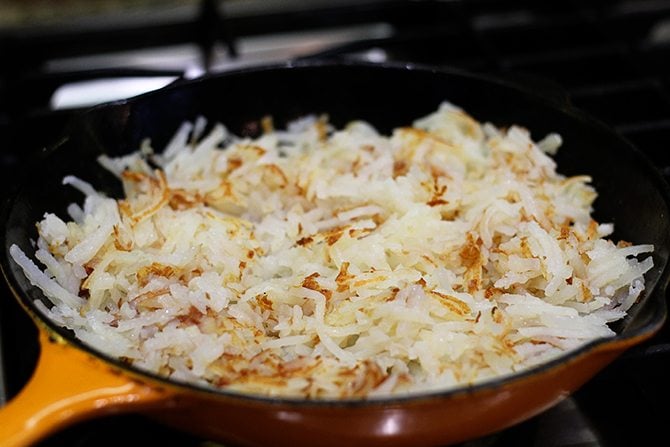 Add about 2 tablespoons of vegetable oil to the skillet.  Once it’s hot, add in the hash browns.  Stressing them down slightly in the pan allow for more contact with the pan and gives your more crispy brown pieces.  Cook for 7 to 8 minutes, then drizzle the remaining tablespoon of oil and flip the potatoes over to cook the other side. 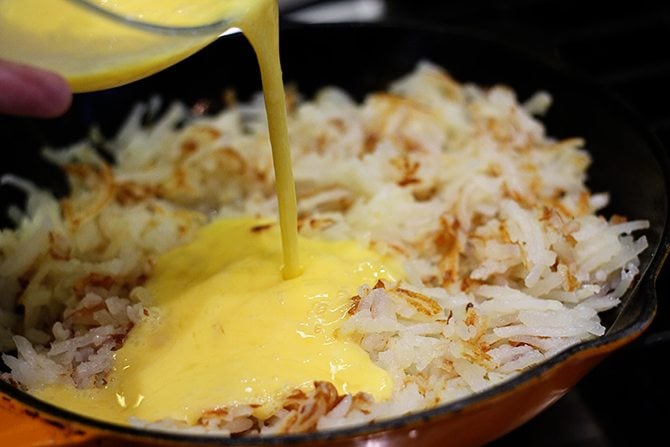 Once they’re cooked, pour in the scrambled eggs and add the spinach.  Stir and cook until the eggs are cooked through and the spinach has wilted.  Stir in the chopped bacon and then add salt and pepper to taste.

See, easy peasy, lemon squeezy!  Not to mention super delicious and quite but lighter thanks to that chicken bacon! 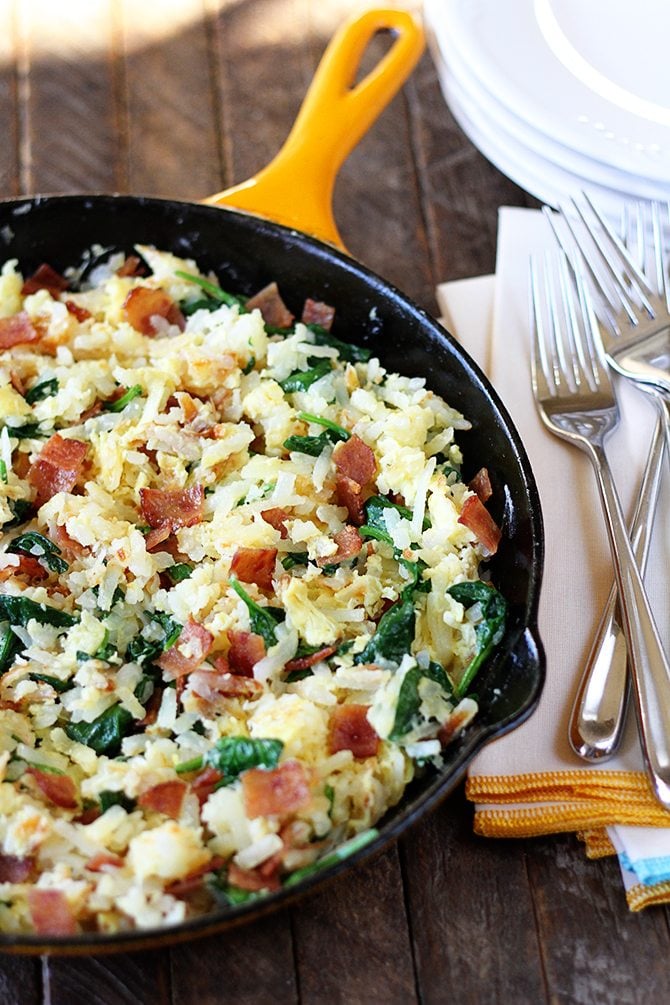 My friends at Simply Potatoes are great about offering up an amazing prize with each of these posts.  This one is no exception.  You could win a huge Lodge Cast Iron Skillet simply by entering below.  I have this exact skillet and use it all the time.  Be sure to scroll to the bottom of the post to enter! 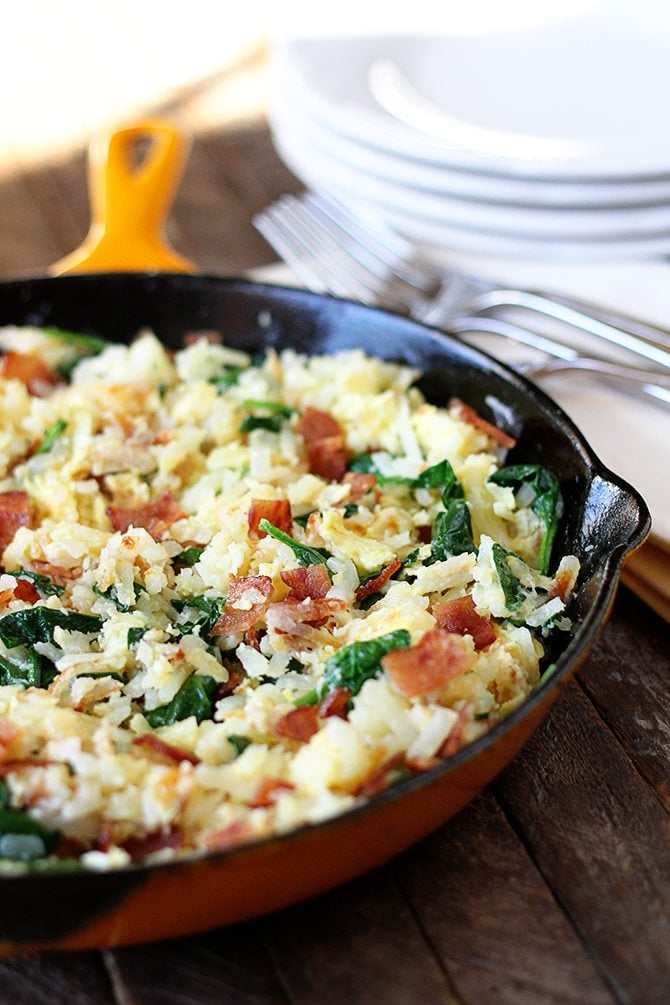 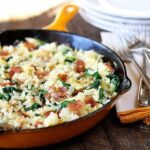 This is a sponsored conversation written by me on behalf of Simply Potatoes®. The opinions and text are all mine.